A Look into the Future: Upcoming changes and what we are working on

It is coming up on a year since Ganz took over the reigns of Kingdoms CCG and the game has changed a ton - seven new heroes, two new card sets, robust Arena play and an improved early game for new players.

While I'll save my own review of the past year for a future post, I want to share with you what we are working on now, and what we will be working on in the future.

We've got some major changes upcoming and we want you to be prepared.

These changes will occur prior to the release of Gods Reborn, likely next week.

I put the question of changing Scavenging Goblin to work on combat only damage to the community and the response was overwhelmingly "yes". So as of our next release, the dreaded Concealed Dagger/Scavenging Goblin combo will no longer work. No other changes are being made to Scavenging Goblin. You'll still be able to give Goblin haste, or take an extra turn and swing in, but the days of the six-mana "Deal 1 damage, steal all charges" will be over.

Haste is changing. As of the next release creatures that lose haste for any reason prior to attacking on the turn they are played will no longer attack. In technical terms, we're now checking for the presence of haste, and the turn that the creature came into play, prior to battle.

Currently, this really only impacts the Empower combo, which isn't even commonly played, but that's not the point. By making this change we're able to open up new design space without having balance issues. There are now two creatures in Gods Reborn with conditional haste, and a new "use abilities to win" card that I know players will build around.

The change also just makes sense. In no other trading card game that has haste (and they almost all do) can a creature attack if they lose the ability before attacking. Having it different for our game is confusing to new players and doesn't even make sense with the ability's description.

While we are looking into longer term solutions to the current Guild War issues, we will be making some initial changes to make Wars faster to participate in. The changes are:

1) Each War will be reduced from 30 to 15 battles.
2) The amount of Gold made by winning a battle will be increased.
3) The amount of guilds in Silver and Gold leagues will be increased. This will allow for more players to enjoy a higher level of competitive play.
4) We may decrease the number of guilds that change leagues at the end of each season. What I'd really like is to make it so guilds can actually choose the league they're in and when they move, but that is a longer term goal.

Note: we've never made this sort of change to the Guild Wars system before, and cannot 100% test this in our local environment, so it might be bumpy. We're not making any major code changes so it should run smoothly, but we do want players to know that interrupts may occur.

Other than Gods Reborn, the largest project that we're working on is a new mobile version of Kingdoms CCG. This version will be released on iOS first, but we will follow quickly with a version for Android devices.

The most important change is that our mobile version of the game will be completely integrated into the existing game. So every new mobile player will be new competition wherever you play from. Steam and kingdomsccg.com players will also be able to log into their current account on their mobile device. We're in discussions with Kongregate to see if we can offer the same to our many loyal Kong players.

Finally, as the mobile version uses the same servers as the main game, updates will be lock step with the web version. If its online, it'll be on mobile!

In the early days of Kingdoms CCG, when the Limited and Standard formats were created, it was decided that decks could contain any card that wasn't part of its direct enemy's kingdom. So Elemental decks could play any card except for Mystical cards, Ancient couldn't play Alchemy and so on. Unaligned heroes, as a result, could play any card they wanted. No restrictions whatsoever.

The result is that Heroes become far more relevant than the Kingdoms they represent. Card balance becomes extremely difficult and the baseline for deck design becomes stagnant.

This simply isn't good design, and it isn't good for the long term health of the game. The game is called "Kingdoms CCG" not "Heroes CCG" - Kingdoms must be relevant.

With the release of Gods Reborn we will be changing how deck building works in the Standard and Limited formats.

Standard and Limited players will now need to build their decks with two kingdoms. The Kingdom of their Hero, and a kingdom of their choice (excluding the opposing kingdom), plus any unaligned card. Unaligned Heroes will get to choose any two Kingdoms, so if you really want to combine Holy and Undead cards you'll still be able to. 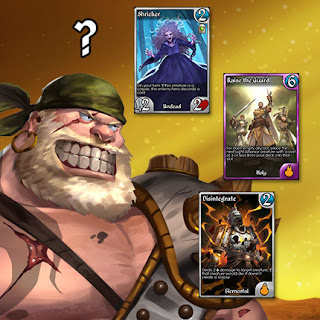 Recently we looked at Cewen's Limited Bothar deck. While mostly Ancient, it used a Holy card for its combo, elemental cards for removal, and an Undead 2-drop to avoid Raise the Guard. Now he will need to decide - what is most important? Holy, Elemental or Undead? To stay with the combo, Cewen would need to go Ancient/Holy, sacrificing his removal package. He'd also have to remove his 2 mana creatures entirely, so not to have them grabbed by Raise the Guard. Or perhaps he drops the combo and goes Ancient/Elemental, replacing Shrieker with Swiftshot Rangers. These are the kinds of discussions we want players to be having.

This format was played by our Beta testers during the testing of Bothar, MEK and Felincia and the response was largely positive. There was some concern that players would need to adjust every deck they have (this is true) but the feeling was the result was worth it.

Naturally we know that players who love their current Standard decks will want to keep playing them. For these players we will be creating a new format, called Legacy, which will continue to use the current rule set. Legacy will be supported in Tournament play and may appear from time to time in the Arena.

We do want to hear from you on this change. Please post your comments/questions in this forum thread.

Recently we ran two surveys - one for our regular players, and another for players who used to play but haven't played recently. In both cases the number one requested improvement for Kingdoms CCG was MAKE MORE CAMPAIGN (and said that loudly as well).

We hear you. While this request is not new, we never knew exactly how important was to our fans. Now we do. Furthermore, we've discovered that even amongst regular players and veterans, 47% of players actually prefer playing against the AI. We will now start expanding the campaign, with the goal of completing the map. This will be done over the course of a number of releases - one section of the map at a time. Yes, we will have new enemies to fight and new promo cards to unlock.

We will also continue to improve the existing Training Grounds. We'll be doing this by adding more variety to the decks played by the AI, smoothing out the difficulty and reducing the number of battles needed to pass a node.

We hope to have the first expansion ready by Christmas.

We're definitely not happy with how Tournaments have been designed. There should never be a point where you can go to the Tournaments section and not have a Tournament to enter. You should also know how many players are waiting for a tournament to start, and - crazy thought - every tournament should actually start.

We have planned out and designed a completely new Tournament System. This system will have on-demand tournaments. As soon as a tournament fills at 4 or 8 players (depending on the event) it will begin and another tournament will open. Formats will rotate weekly, so you'll know what is available before you even log in.

We currently don't have a timeline for this feature, but it is very important to us, and we hope to have it in place by early 2016.

First off, thank you for reading all the way to the end. There was a lot to get through, but we hope that it was worth it.

As a reward, here is another preview card from Gods Reborn, featuring the art we showed off in our last post: 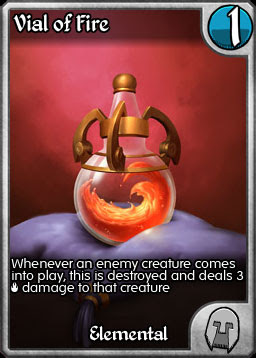 It's a Lightning Bolt for 1 mana! Sort of. Your opponent will get to choose which creature takes the damage, but it will definitely put a road block on their plans. In a meta of small creatures, a few vials will go a long way. Note that playing multiples may not always be a good idea, as they will all trigger on a single creature entering play. Great for blowing up Elara, but not so great against a 1/1.

Agin, we'd love to hear your thoughts on any or all of the changes listed here. Join the conversation in our forum.