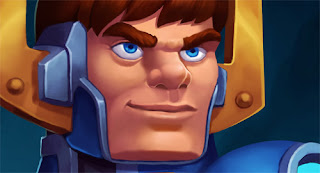 In our last preview we looked at Peasant, a 1/1 for 1 that wasn't even worth that single point of mana. Now we're going show you how a single line of rules text can turn a peasant into a powerhouse.

Before we show you the card, let's take a look at the Alchemy kingdom. In the early design of Kingdoms, Alchemy could do just about anything. There are cards with life gain, charge gain, charge removal, mana acceleration, direct (though randomized) damage, the best tutors in the game and two great abilities in unblockable and volatile as well. When we took over Kingdoms, I knew that I wanted to prune down the breadth of Alchemy's options, while enhancing and spotlighting what we had left. So life gain has gone firmly to Holy and Undead, charge removal to Ancient, and mana acceleration to Mystical.

One of the unique aspects of Alchemy that intrigued me was their ability to add any Ability Icon in the game, randomly. For instance while Puresoul is a Holy ability, Alchemy could end up with creatures with Puresoul through their tinkering. Tribes showed this idea in force, with cards like Underground Crown, Perpetual Machine and Prosperity. We continued this theme in Light Ascending and Descent into Darkness in cards like Forge-made Giant, Unstable Conflagulator and Tilt the Battle.

In the competitive scene though, adding random abilities has not made much of an impact. The random nature and the fact that not all abilities have an immediate effect on the board has limited the play of these cards. Until now. 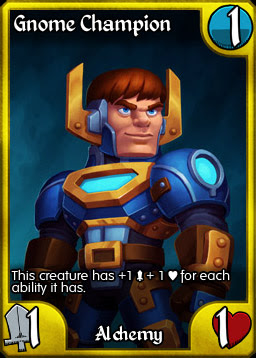 Easily one of the breakout cards of the set on the Beta, Gnome Champion get huge... fast. The Champ is a Gnome Artificer Knight, so combine him with this... 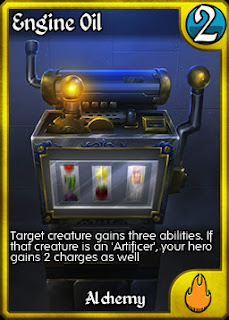 And let that soak in a little. Get lucky on the Engine Oil and you can have a 4/4 with 3 abilities on turn 1... and two bonus charges just for fun! Note that Gnome Champion only gets a +1/+1 for each unique ability. Armor 2 or Resist 4 each only count as one ability. If he loses an ability, he loses a +1/+1 as well (so Hose Down will kill him every time).
,
The Champ has the ability to finish games very quickly, but he is not without risks. First off you must build around his ability. Unlike a creature like Raging Vines that will grow just by the inherent nature of playing the game, Gnome Champion without cards like Engine Oil or Unstable Conflagulator is just a yellow bordered Garden Gnome.

Beyond this, as you're using multiple cards to power him up, you open yourself to giving your opponent card advantage. Even a simple Rebound get set you back multiple cards, while Fae Charm can be backbreaking.

In the end though, we believe the risk is worth it. Having the chance, no matter how slight, of barrelling in with a 7/7 Indestructible Overrun creature on turn 2 is just too fun not to try out.

Tomorrow will be our final card preview article, when we look at the Legendary cards of Gods Reborn.

And while we're discussing new cards, we're updating the prizes of this arena season to these beautiful alternate art cards: 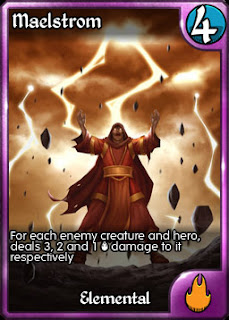 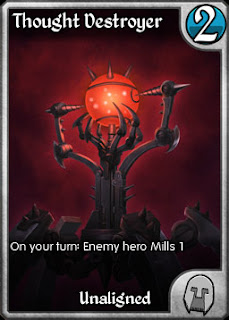