Here is a card that I know you all have at least one of and have likely never, ever used. 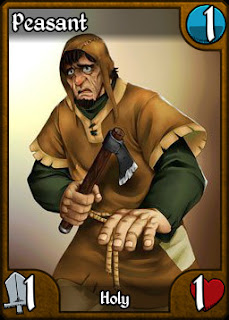 Pretty good guess right? It's a classic vanilla creature. No abilities, boring stats. And in Kingdoms, if you really, really needed a 1 mana soldier, you'd play this: 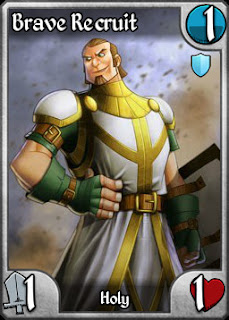 Yet even the Brave Recruit is rarely used, because for just 1 more mana, you can have either of these: 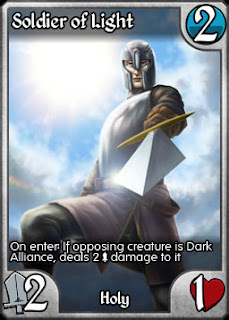 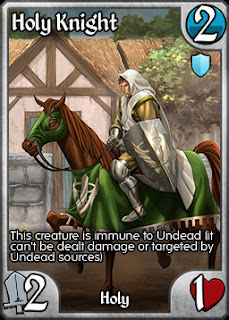 Each has one more Attack and a relevant game ability... and we haven't even gotten out of Uncommon rarity!

Overall, vanilla creatures and so-called french vanilla creatures (with ability icons but no game text) are a very hard sell for constructed play, as in almost every case you can find a creature with the exact same stats AND game text in the same or higher rarity. As vanilla creatures by their definition don't have any immediate board presence (other than blocking), why would you ever choose to play one?

Well, in Gods Reborn we're giving you a reason: 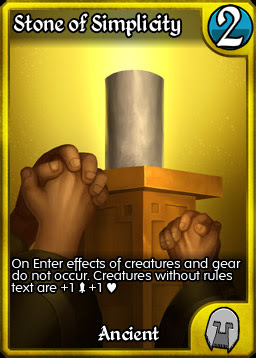 There is nothing I enjoy more than designing cards that do something completely new and unexpected. Stone of Simplicity combines two powerful effects into a single card. First it provides the more important half of the rune word Deny on a permanent basis, shutting down numerous cards including Arch-Mage, Fae Combatant, and Fury Stoker. These cards are particularly inefficient when they lose their On Enter - no one want to pay 6 mana for a 1/2.

While this effect on a gear was a popular request in the forums, and will see the card appear in decks just for that purpose, it is the second part of the card that I'm most proud of. Never before has being a vanilla creature been a positive for a card. Suddenly Brave Recruit becomes a 2/2 with Armor for 1 mana. A simple Black Bear becomes a 3/3 for 2 mana, and Runed Kermode becomes a beastly 4/4 with Resist for 4 mana. All stat lines we'd never print without a hefty penalty.

Note that the card does not say "non-Token," nor does it say "Ally." Yes, the Stone affects both player's creatures, and it does affect Tokens. Abaddon, with his strong Reassemble theme, may be tempted to join sides with the Ancients to make his zombies and skeletons extra powerful, while dropping 4/4 Angels could finally push Akatril into the limelight.

Stone of Simplicity is definitely a "build around me" card that could see rise to some powerful decks using the most basic of cards.

And I know what you're thinking, "Nice card, but you actually think it will make me consider playing a common, vanilla 1 drop?" Yes. 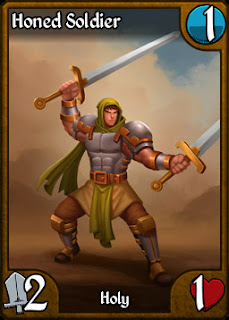