Just want to wish all of our Kingdoms CCG players a merry Christmas and a happy holidays!

Remember to play Kingdoms on Christmas Day to get your FREE copy of Santy Claws: 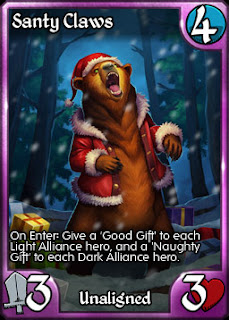 Here are the two cards this festive beast creates: 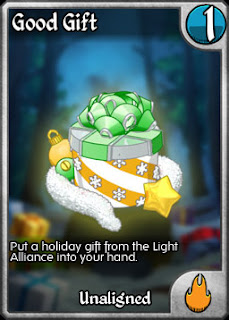 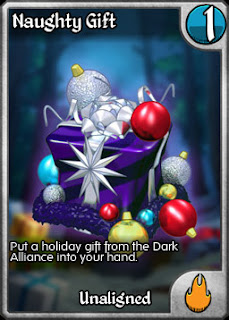 When you open (aka "cast") these gifts, a good card from your Alliance will be created in your hand. Every card is Rare or Epic and they all are useful in multiple situations regardless of deck, so no Backfires or Magnum Opus of Light. Yeah, it's random, but who doesn't like getting presents?

And if you missed the announcement on Facebook, Kingdoms CCG is available NOW on Android phones and tablets! The iPad version is in the hands of Apple, so we'll have it available as soon as Apple gives us the go-ahead.

Just a reminder that our mobile versions can only connect to accounts made on the device itself, dotcom, or Steam.

And if you haven't done so yet, definite check out the best Kingdoms CCG card viewer and deck builder out there. xankludan has done a killer job on this, and I've (finally) sent him the rendered cards from Gods Reborn so that it can be updated.

So again, have an amazing holiday, and we'll see you all in the new year!
Posted by Unknown at 10:50 No comments:

Just a quick release this morning to fix some bugs created in our previous release.

1) Chat is back working the way it is supposed to. You can now click names to pull up profiles, reply to PMs and see more than one line of text in the typing area.

2) Bothar's Crush You! now actually only does 3 damage.

4) Fixed a bug in the interaction between Dimensional Rip and Elara.
Posted by Unknown at 07:29 No comments:

NOTE: It appears that some of the code we've added preparing for the mobile release of Kingdoms has messed up chat. Currently you can't click a player's name to bring up their profile or reply to PMs. We are on this and will have a fix ASAP.

1) Enemy AI heroes now have a "thinking" icon. To make it clear what is happening on their turn.

2) The Deck Builder now displays Kingdom icons for your Hero and each kingdom in your deck.

1) Thania's Step Through Time will now properly prevent charges being added when used multiple times in the same turn.

2) The ability "Support" can no longer stack. Stacking never affected the ability, but it did prevent you from getting other, more useful abilities when granted by a randomized source.

3) Queen of Dragons has her Indestructible back.

4) Big Frosted Giant now properly gives Slow to creatures that attack it. The Slow stays for the attackers next turn.

2) Opus of Gadgetry now awards 2 charges in each ability instead of 3.

For a full overview of the changes with reasoning, read the full article here.

1) ALL 15 Life/2 Mana heroes have been moved up to 16 life. Now the life/mana ratios have been balanced across all of the heroes.

2) Bothar's Wrecking Ball has been moved from 3 charges to 4.

3) Bothar's Crush You! now deals 3 damage to a creature instead of 4 and removes 2 charges from the enemy's third (aka Ultimate) ability only.

4) MEK's "Mechana War Banner" now reads "Ally creatures are +1 ATK and have Volatile. On your turn: If you control a 'Construct', draw a card.

5) Thania's Step Through Time has been moved from 7 charges to 8.

6) Noran's Polymorph has been moved from 7 charges to 6.

7) Nomad's Grand Theft has been moved from 7 charges to 6.

1) The Arena will now award Gods Reborn packs instead of Descent into Darkness.

2) The card prizes have been changed to Alt-Art Queen of Dragons (top players) and Alt-Art Swiftshot Ranger (participation). These prizes will be awarded in this season and the next.

We're running a week long contest on Facebook for a very cool prize - YOUR CHOICE of Gods Reborn artwork in a custom printed poster mailed directly to your door (plus 50 gems to boot!). There are a minimum of 10 prizes to win, but if we get a lot of shares, we could increase this number!

(Sorry, open to USA and Canada residents only - except Quebec, New York and Florida)
Posted by Unknown at 12:30 2 comments:

End of the Year Balance Changes!

To end the year, we've made a number of balance changes to Kingdoms CCG. The goal of these changes are to expand the top tier of heroes, and reduce the gap between the top tier and bottom tier. There will always be better and worse heroes - perfect balance is impossible and would be broken each time we release a new set - but we want players to be excited to build around any of our heroes and leave room for innovation. You never know when the next top deck is just around the corner.

Overall the game has settled into a top tier of heroes:

The very muscular elephant in the room is Bothar. Bothar was an attempt to create a Standard playable Hero in an age where Ancient heroes were consider "unplayable" in that format. The change to 2K has turned that age on its head, and Bothar's kit of flexible skills has reached the top of both formats by a strong margin.

We recently made a small change to Bothar, but the impact was minimal. So we've decided to make more significant changes to bring him in line with the other heroes in the game.

1) Wrecking Ball has been moved from 3 charges to 4 charges. This gives decks with small creatures and support gear a bit more room to be effective.

2) Crush You! has been changed to do 3 damage instead of 4, and remove 2 charges from the enemy hero's third ability only. Bothar remains strong against gear-based decks, but becomes a little less effective against creature based strategies. By removing the randomness from the charge removal opponents can now better plan their strategies against Bothar.

We feel that these changes keep Bothar powerful - among the best in the game - but should give all other heroes more game against him.

Next up is MEK.

With the toning down of Bothar, the concern has been that MEK will take over, and that MEKs lower numbers are directly related to Bothar's top tier status. We agree and have proactively changed MEKs most powerful tool - the Mechana War Banner itself.

Mechana War Banner now reads: Ally creatures are +1 ATK and have Volatile. On your turn: if you control a 'Construct', draw a card.

Removing the bonus +1 HP for Ally creatures makes controlling MEK's forces a little easier, and changes the dynamic of the late game for MEK. While MEKs forces will be able to "trade up" easily, they'll be much less likely to remain on the battlefield after combat is done.

More significant, the card draw is now conditional. As MEK creates Constructs it doesn't force players to make wholesale changes to their decks, but instead simply gives opponents a new method of controlling the number of cards MEK is drawing.

Finally, we have Thania.

Thania has avoided adjustments for almost a year, despite being a strong choice that entire time and dominant (60+% win rate) for much of that time. The time has come to make a change.

Step Through Time has been moved from 7 charges to 8 charges.

Arcanos has not been changed at this time, but we are watching him closely.

One final reduction in power has gone to Opus of Gadgetry. This gear now grant 2 charges in each ability instead of 3. The Opus was making balancing Hero abilities difficult, with players often able to use and refill their abilities to use them again on the same turn! Opus is still very strong, particularly when used in multiples, but we do believe that this will restrain its power overall.

We have also given a few heroes an added boost to try to bring them back into the metagame and again expand the range of heroes that players consider "top tier".

1) Noran's Polymorph has been moved from 7 charges back to 6. After a year with this change in place, it has become clear that Inspiration was Noran's OP ability and that Polymorph, while very strong could be reduced to give Noran some built in removal. Also, Puresoul is far more common now, so a strong counter is available.

2) Nomad's Grand Theft has been moved from 7 charges to 6. Nomad has a ton of potential, but has never been a top tier hero. My reducing the cost of his strongest ability, our goal is to make Nomad more intriguing to play and create a new challenge to the meta.

3) Olfaan has been given a full upgrade. All of the randomness from his abilities have been removed. Here he is in his new glory: 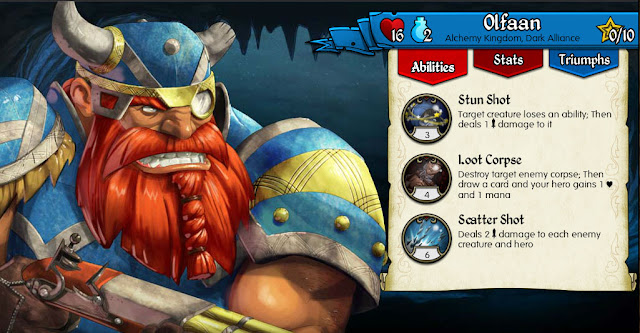 Numerous redesigns of Olfaan have been discussed over the past year, but at the core of it he was never a bad hero, just completely unreliable. We've given him the reliability he deserves and expect that he will now be a strong aggro option for Alchemy.

Finally, as mentioned in the forums ALL of the 15 Life, 2 Mana heroes have been upgraded to 16 life. This includes: Amorya, Shadow, Nomad, Petrice, Amarus, Wilrius, Olfaan, Crutomist and Alisten.
Posted by Unknown at 10:21 No comments: