Gods Reborn: May I Have a Word, Please?

Rune words. Unique to Kingdoms CCG, Rune Words affect both players with a global effect that lasts a certain number of turns. Rune Words have a perennial sideboard favorites, with cards like Silence holding back combo decks and Deny putting a damper on high value creatures. Other Rune Words, like Punish and Immortal, have been the backbone of their namesake decks and cards like Powerless and Poverty have found places in decks when the meta is ripe for the picking.

In Gods Reborn we are introducing three new Rune Words that could all see constructed play.

First off he have Fate. 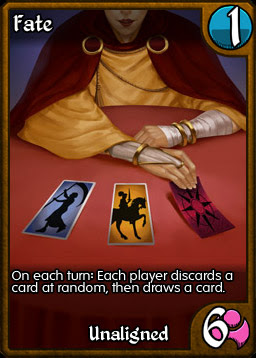 Fate quickly cycles the cards in your hand discarding one and drawing one each turn. This is a great card for filling up your own discard pile, whether it be for Dreadful Return targets, or fuel for Fury Stoker and Gob Hog Blazer. It also combos well with Mindgripper and Shuttershock Elf for an aggressive combo deck.

In the Uncommon slot we have a more aggressive option... War. 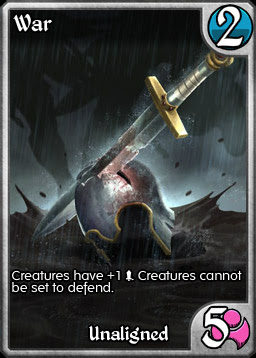 War isn't a subtle Rune Word, but for aggressive strategies it can push through the extra damage needed for victory. While it is a symmetrical effect, if your opponent is playing bigger, slower threats, you'll be able to get more benefit out of the card. War combos particularly well with 3-slot token generators like Endless Evil and Lightning Blitz. The added ability of preventing defending does not prevent players from moving their creatures around to prevent them from attacking, but that requires them to leave slots open, giving you the advantage.

Finally, at rare, we have the Rune Word a lot of people have been waiting for, Rust. 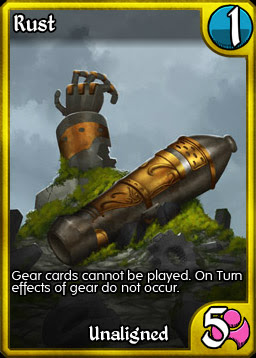 In the style of Silence, Recoil and Clear, Rust prevents Gear cards from being played from hand, and furthermore turns off many popular gear for the length of its timer. Deploy Cannon tokens do nothing, Mechana War Banner stops drawing cards, All the Essences in the world just sit there. Rust is the perfect sideboard card, and can be maindeck worthy in the right environment.

And as we're on the topic of Rune Words, why not get some secondary value from all those cool new toys? 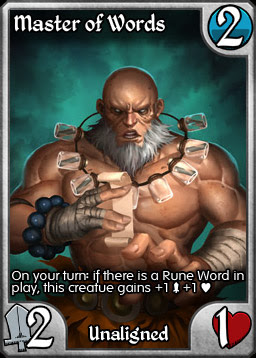 Master of Words can grow quickly if not dealt with and has no downside. The Master also doesn't care whose Rune Word it is, so changing the current Rune Word with your own doesn't slow him down. And as an Unaligned creature, Master of Words will happily work with any Hero.

Next we'll take a look at simple 1/1 for 1 mana, with no abilities and a simple line of rules text... that you will definitely want to play. Stay tuned!