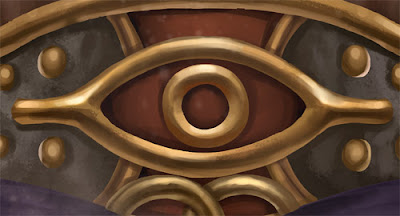 Welcome to the final card preview article for Gods Reborn. We've saved some incredible cards for last, and you'll be able to get your hands on them, and all of Gods Reborn, in just two days. That's right, Gods Reborn will be on sale on Thursday!

Also in this release we will be unveiling the new "2 Kingdom" Standard and Limited formats. This will affect the current Arena season, so we hope that you've been hard at work designing your new 2K decks. Note that Guild Wars will not be moving to the new Standard at this time. Guild Wars will remain in the Legacy format for this season and next at a minimum. In addition, we're taking this time to make some hero balance changes. We will outline all of the changes in this next release tomorrow, so let's get back to the reason you're here... NEW CARDS! 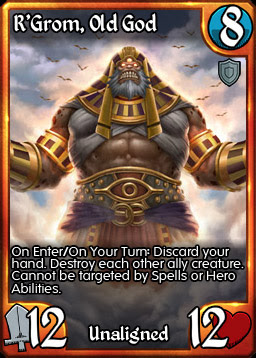 R'Grom, Old God was awakened by the terrible battle between Elara and T'rror and is not happy about it. Not happy at all. You will fear him. You will not control him easily. He will destroy all.

R'Grom is the largest creature in the history of Kingdoms by far. At 12/12 he can kill any hero in two swings. Yet that power comes with the most epic drawback in all of Kingdoms as well. When played you lose your entire hand and all creatures you have in play. And don't think you'll just have to wait a turn before getting going again. R'Grom demands sacrifice - each turn your creatures will die, and your hand will be discarded.

This is the ultimate in "All-In" strategies. If you play it right, R'Grom win you the game quickly. Play it wrong - like playing R'Grom and getting hit with a Toxic Immolizer when you don't have a hero ability to remove it... well you won't be seeing a card for 12 turns. Good luck with that.

Yet if your opponent isn't prepared with a proper counter they will have few ways to neutralize this massive threat. Final Verdict does nothing. Realm Crusher does nothing. No you can't target R'Grom in any way. Yes you can throw creature in front of it to block, but that will get expensive quickly.

Or you can play our next Legend. Remember in the Gods Reborn announcement where I said there will be a 2 mana card that kills Elara? What if I told you it could kill R'Grom as well, but not a simple Portly Friar? 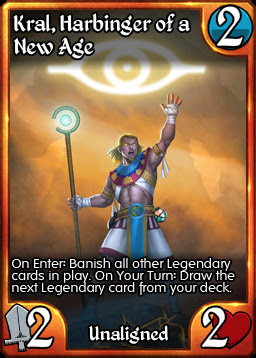 Kral is the avatar of a new age in Euna. He clears out the out Legends, and brings forth the new. In game terms he banishes - not destroys - any Legendary card in play. This includes gear like Ayrn's Cursed Bulwark and the effect of an active Beckoning (the Beckoning card will remain in the discard pile).

If he lives, he will begin drawing Legendary cards from your deck. Obviously this is a very powerful ability in Standard, but Kral has no defense - he's just a basic 2/2 creature that can be killed by a simple Firebolt.

And what better card to use to usher in a new age, that our very first Legendary spell... 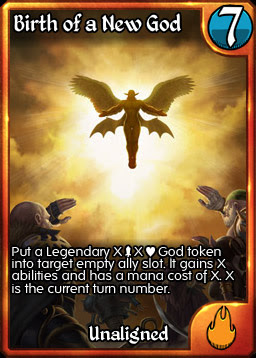 This is much easier said that done though. Aggressive strategies can often close out a game on turn 4-6, at which point in the game Birth of a New God is only a little more powerful than a Forge-made Giant.

And the investment is a heavy one. There is no way to cheat the new god into play, and if it doesn't hit Indestructible in its chosen abilities, it could quickly find itself a very pretty corpse.

Finally, we have our first 3 mana Legendary, a much subtler creature who can have a massive effect on the board. 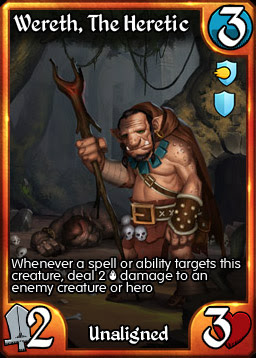 Wereth, on the surface, may not seem like a Legendary creature. Perhaps not in the face of heavy hitters like R'Grom or T'rror, but get him into play and see how surprisingly powerful that a simple troll can be.

When targeted with a spell or ability by either player, he throws a mini-Lightning Blast at a random enemy target. With built in Resist and Armor, Wereth can even be targeted by abilities that you would usually never consider using on your own creatures. Turn a 1 point Blistershock into 2 damage by targeting Wereth instead of the enemy hero. Use pump spells like Ancient's Will to create a larger troll and hit the opponent's life or creatures at the same time. When Wereth is in play every card in hand and hero ability will need to be re-evaluated. That is the stuff of Legends.

These great Legendaries and 93 other new cards will be yours to discover this Thursday. Get ready for a grand new age in Kingdoms CCG!