We've had another failure at our service provider. The game is currently down for all players on all portals.

As with the previous service issue, we cannot directly fix this issue and must wait for our provider to get everything running again. We do not have an ETA on when this will be resolved but have been assured that it is being worked on now.

UPDATE: 3:40 PM EST - The severity of the issue is such that we're being told that service won't be resumed for several more hours. We'll keep you posted.
Posted by Unknown at 11:11 No comments:

In today's release we made a number of balancing changes and added a new promotional bundle for collectors. We also gave a much needed buff to Alisten, who has struggled to compete even after her previous boost. We will be writing a follow up post with a detailed look at some of today's changes.

NERFS MADE
BUFFS MADE:

Support is the defensive equivalent of Allegiant. Whenever a creature of the same Kingdom comes into play, a creature with Support will gain 1 HP. At this time no card directly give Support, but it can be gained through cards and text that grant random abilities.

A creature with Doomed is not dead yet, but they will be soon. A creature with Doomed will die at the end of their controller's next turn. Note that this is not a destroy effect, so will not be prevented with Indestructible or by card text. So get your last hit in. There are currently no cards or abilities that will give Doomed to a creature.

The Prize Card for Season 4 is Variant Art Soul Drain. ALL players who are eligible for prizes will also receive a Variant Art Disintegrate - so whether you're rated 2000+ or 1300, get your games in and you'll receive a promo! 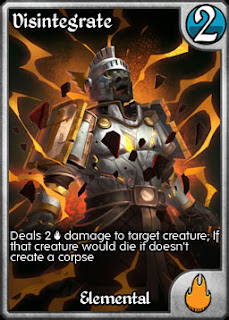 For veterans looking to make their deck unique or new players looking to get one of the top cards in the game at a discount, we've created the Echo Blast Promo Pack. For just $20 USD, you will receive 4 variant art Echo Blasts with Limited Edition etching, plus 50 Gems! This offer is only good available until the end of August. 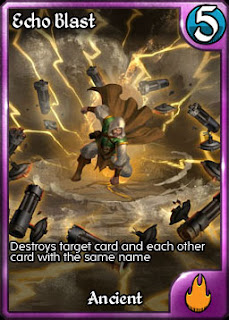 Our service provider has just informed us that they have a fibre cut that is affecting our services.  There is no ETA at this time.  We keep everyone updated as best we can.  Thank you
Posted by Unknown at 09:36 No comments:

Just a quick note to let players know that Kingdoms CCG will be offline from 8 am EST until noon EST tomorrow, July 16, 2015.

This will be for another pure server maintenance. No new content or coding changes will be made at this time. This should complete our maintenance and we'll be back to getting new content up next week.

One of the things we'll be putting up next week is our Season 4 prize card... a variant art version of the popular card "Soul Drain". Here is the final artwork: 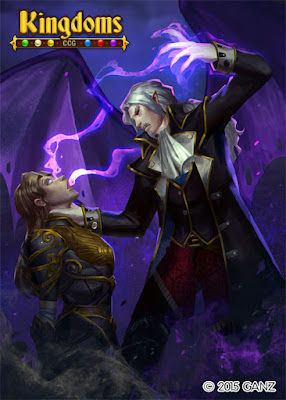 Check out some additional new artwork, including our upcoming Heroes on our Facebook fan page here: https://www.facebook.com/KingdomsCCG

A Look At Arena Season 3

Arena Season 3 is now in the books and its time to look at how we're doing from a balancing perspective.

Limited right now is a surprisingly good state. For the first time that I can remember, there is no hero that appears in 20% of games (looking at the top 100 players). The most used Limited Hero is Bahamut who appears in 19% of battles, and has a positive win ratio, but a ratio that is no higher than Akatril who appears in just 7% of battles.

Standard, on the other hand, has really come down to three decks:

These three decks appear in 90% of battles:

As well, the Raise the Guard combo - Manacycle Wizard, Fae Paragon and Raise the Guard - take up three spots in the top 10 cards played in Standard (2, 3, and 6 respectively).

Raise the Guard was one of the first cards on the Watch List and we are now looking at how to get it under control. Both Fae Paragon and Firestorm Shaman (which itself has been a concern for two years) are also being looked at. We will be announcing what changes, if any, will be made next week and encourage players to discuss these cards in the forums.

Please note that if Raise the Guard is changed, we will be offering a trade in period.

We're not only reviewing the over achieving cards, but also looking at many of the "bottom of the barrel" rares to see if we can give them a little boost. Sure, most still won't make a large impact on competitive play, but if we can make them more fun to allow for niche play, it will be worth it. A thread on this topic can be found here.

Have a great weekend and we'll see you on the battlefield!

For a full run down of the improvements in today's release, please read last week's blog post.

Of course we have a few extra surprises for you:

The Bard Bundle has been replaced with a new bundle that includes PvP season 1's Summoner's Gambit card instead of the Bard. It's an amazing value with 150 Gems and the card for just $10!

If you've already purchased the Bard Bundle you WILL be able to purchase this bundle as well. And if you hadn't, don't worry we'll switch between the two bundles every so often so that players can get both if they so desire.

And yes, if you do purchase the new bundle, you will unlock Summoner's Gambit in the Prize card section of the shop so that you can get copies 2-4. 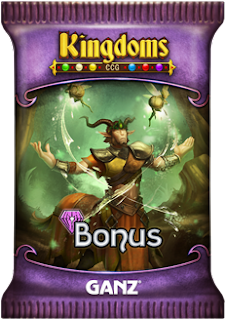 Now when you spend $20 or more on a single Kingdoms purchase, you will receive Bonus packs in addition to everything else you purchased. Each Bonus pack contains three cards, two of which are guaranteed to be rare or better. It is even possible to get a Rare, Epic and Legendary in a single Bonus pack.

Recently we had the unfortunate situation where a user repeatedly spammed chat with the use of alt accounts, creating a very negative user experience. To prevent this from happening in the future, all new accounts will be required to get 10 wins before they can join the chat. We hope that this will create a serious enough speed bump for those who wish to abuse chat with multiple accounts and help our moderators maintain an enjoyable chat space.

We hope that you enjoy these new changes to Kingdoms CCG and we'll see you on the battlefield!
Posted by Unknown at 12:04 No comments: