The Other Big Changes

With this major release we have also made some significant hero changes, and changes to what is available in the store.

In an effort to create more diversity in the field going into the new 2K era, we've toned down some of the top tier heroes and given some buffs to a few lesser used heroes. Note that the goal of toning down the top heroes was not to take them down to the middle, but rather move them down a little to give an overall boost to everyone else.

MEK: Build An Army now produces a 2/2 Mechana Construct token creature with Volatile. The random bonus ability has been removed.

MEK is obviously one of the most powerful characters in the game, and has the ability to control a game with his abilities alone. When looking at his abilities we felt that the change with the most impact would be to weaken his creature tokens, giving opponents an easier time removing them and granting more time to attack for the win while MEK sets up his wall of gear. Build an Army is now closer in line with other 4-5 charge token generators.

Bothar: Surge of the Ages no longer provides 2 mana when an Ancient card is drawn.

Looking back at this ability's history, it was buffed twice in Beta, in concern that it would too weak. Time has proven this logic flawed. The mana bonus honestly wasn't necessary for this ability and gave it flexibility it just didn't need.

Arcanos: Blistershock now only deals 2 damage if you target a creature, and you have already played a spell. It will never deal 2 damage to a hero.

When we were looking to buff Arcanos, he was languishing at the bottom of the leaderboard, unused and unsuccessful the few times he was. So we pushed him. Hard. It seems a little too hard, as Arcanos has been a lock for top 3 Hero since the change was made. Again we wanted to make a small change here that didn't remake him, but give him a little less inevitability. He remains a strong Elemental control choice.

I add this not as a joke, but because I know you'll be wondering why no changes were made. In discussions on the Beta about Thania, it was brought up that of all the top decks, Thania (and Dravkas) will be the hardest hit by the move to 2K. No matter which direction she moves - Mystical/Holy for RtG, Mystical/Ancient for removal spells or Mystical/Alchemy for charge gain - the loss of the other Kingdoms will hamper her success. This said, we are watching her like a hawk. If a change is made, Step through Time will be moved to 8 charges.

Wiloryn: Dispell now reads "Target creature loses all status effects. If it is an enemy, it loses 2 abilities." Rewind now reads "Return target card with mana cost 4 or less to its controllers hand. If it is an ally, gain 1 mana."

Wiloryn has long been considered a weak hero, and part of this was (A) the lack of usefulness in her abilities and (b) the fact that she actually gave benefits to the enemy. This has been changed without re-imagining her. Now Dispell has the flexibility it needs, and doesn't punish you for using it on your own guys. Rewind also just becomes a solid bounce ability with no draw back.

Crutomist: When Entangle is used on a Light Alliance creature, it now also gives Immolate.

Crutomist returns to his proper place as the burn specialist. As many of the top creatures are now Light Alliance, this change gives Cruto a powerful clock against creature-based strategies. Combine with Firesworn Elf and the newly released Curse of Flame to quickly stack Immolate to create "win now or lose" situations for your opponents.

Grovenhold: Battle Cry is no more. It has been replaced with "Close Combat (4 Charges): Target ally creature and its opposing creature deal physical damage to each other equal to their ATK" (aka Brawl)

This is likely the most "out of left field" of the the bunch, but again has been designed to give Grovenhold new ways to build and have better synergy with his signature move, War March. Now Grovenhold can use creatures with powerful On Death abilities and get instant value as they are used to kill opposing creatures, in a sort of "pseudo-haste" fashion. And at four charges, the corpses left behind can act as cover so that a creature can be pushed through with War March.

Three big changes in the store with this release:

We've also made another change that we think you'll be pleasantly surprised by, but we'll let you figure that one out.

Finally, with the advent of 2K, we needed to rethink how we do the starting decks for our new players. We're happy to say that new account will now receive THREE fully playable decks, with a whole suite of Limited Constructed worthy cards from every set from Core to Descent.

Here is an example: 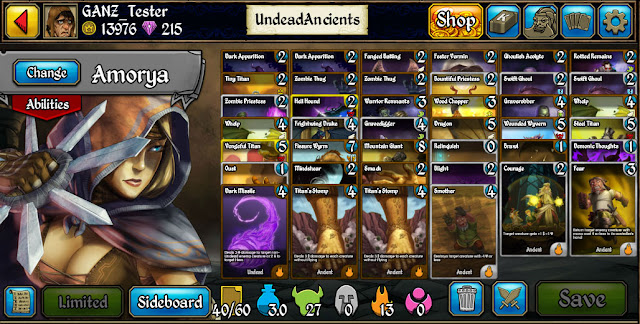 Hell Hound, Oust, Mindshear, Smack, Smother. Right out of the gate. And the other decks have a similar range of solid cards. And in 2K fashion the three decks are:

Now when a new player opens a solid Undead card, they have a deck that it can fit right into. With better decks and clearer direction on deck building, now is the best time to be a new player.

So there you have it. Lots of changes and a big new set. It's a great time for Kingdoms CCG! Enjoy!