The 2K Primer: A Closer Look at the Future of Standard and Limited

This article is an introduction to the new Limited and Standard environment of Kingdoms CCG.

Starting with the release of Gods Reborn, all Limited and Standard events and arenas will use the "Two Kingdom" (aka 2K) rule. This rule is simply this:

A player may build a deck between 40-60 cards using the cards from two (2) Kingdoms plus any Unaligned card.

Your Hero's Kingdom counts as one of the deck's Kingdoms. For example, Jorma decks are Elemental whether or not they have Elemental cards in them. If your Hero has a Kingdom, your second Kingdom may not be the opposite Kingdom (i.e. Elemental-Mystical).

An Unaligned Hero may choose ANY two Kingdoms to build their deck, including opposite Kingdoms.

And that's it. Limited still has its rarity restrictions, and Standard still has a limit of 4 Legendaries.

Let's look at an example. 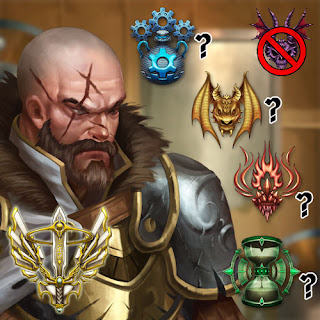 So you want to make a Standard Devroth deck. Devroth is aligned to the Holy Kingdom, so this immediately means two things: first, your deck is Holy. You don't have a choice about this. Your deck can also not include any Undead cards, as Holy and Undead are opposite kingdoms.

So your decision is whether to pair Devroth with Alchemy, Ancient, Elemental or Mystical. As Devroth is built around 2 mana creatures, we need to evaluate our options in each of these Kingdoms, and the support spells that it might provide. Let's go through this.

Alchemy - Alchemy doesn't have a lot of options for 2 mana creatures, but it does have the new Auto-Bot which can be an annoying threat as it just won't go away. Gnome Champion also has potential, but Devroth doesn't grant abilities, so may not be the best fit. In the spell category, we have Rejuve Potion, of course, and Deploy Cannons for extra damage, but not much else. Let's pass on Alchemy.

Ancient - As Ancient is built around large creatures, it only has a few options as well. That said Priestess of War is a solid 2 drop, and Keeper of Secrets can really slow down spell based decks. Ancient has a number of solid removal options, including the "get out of jail" card Echo Blast. Overall though, Ancient doesn't look like the pick.

Elemental - Elemental has some great 2 drops - Swiftshot Ranger, Firesworn Elf, Furous Firehawk, plus packing a few larger haste creatures like Mindshocker and Fury Stoker is never bad. Plus Elemental has the best damage-based removal, to keep the lanes clear for Devorth's beatdown. Elemental is a strong Kingdom to pair with.

Mystical - If you want to take Devroth in more of a aggro-control direction, Mystical has some great options - Dryad of the Watch, Deepwood Druid, Thoughtwoven Spirits, Woodland Sentinel. You lose the direct damage, but gain strong mana gain, Fae Charm and Flashback to close out a game. Mystical is also a strong Kingdom to pair with.

And of course Unaligned has the amazing options of Dutiful Heir, Raging Vines, Erratic Werewolf and Relic Hunter... and you can play them regardless of which Kingdom you choose.

Now the decision is up to you! Build the best deck and hit the Arena.

And if you really, really wanted to pair Holy with Undead, you can. You just need an Unaligned Hero, like this:

As with rarity in Limited decks, the Sideboard is not checked for validating a deck. So you CAN pack cards from another Kingdom in your Sideboard. That said, you MUST replace ALL of a Kingdom to use those cards. So for example, in the Devroth case above, if the deck was 100% Holy except for 4 Disintegrates, and you had 4 Echo Blasts in the sideboard, you could swap them out 1 for 1. But at no time will a Standard or Limited deck with 3 Kingdoms be allowed in play.