In the first of our previews of the new heroes - being released next week (oh yeah!) - we meet the a young mystic who has unprecedented power. Meet Thania, Temporal Druid: 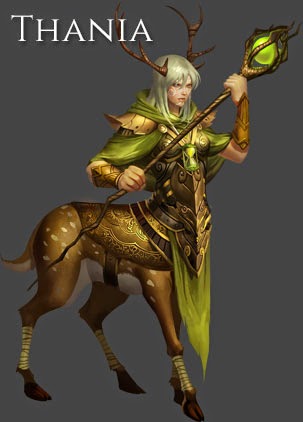 Her description: "Born of mystical magic in a temporal rift, Thania has been a creature of pure power her entire life. The youngest of the heroes, her abilities now rival the most seasoned champions."

Thania uses the mystical energy within her to bend time, and her abilities were specifically designed to have this feel. So let's take a closer look:

A simple ability that may seem underpowered, but is surprisingly effective. Holding off Skullcrusher Giants, Scavenger Goblins, and Bruisers from Beyond for even a turn can give Thania the time to win the game out of nowhere. Combine with Circlet of Wisdom to ensure that your opponent doesn't hit you with Haste before you can apply that Slow.

Ability 2: Temporal Twist - Draw a card. Enemy Hero puts a card from hand onto the top of their deck.

This is a deceptively powerful ability that simulates Thania bending time upon itself. Similar in effect to Nomad's Acquire, you gain a card, and your opponent loses one. But here you draw from your deck, so the card you're gaining is guaranteed to fit your strategy.

Ability 3: Step Through Time - After this turn, take another turn. Your Hero cannot gain charges during that turn.

Take. Another. Turn. You read that right. Possibly the most powerful ultimate ability ever. So powerful that we had to add a caveat to that turn so that you can't "go infinite" easily. Note that this prevents all charges from being gained during that turn - from Rejuve, Charge Potion, etc. But this extra turn can give you the chance to get in that fatal blow, or set up your combo, or, you know, play Flashback and keep the fun going.

What are the charges for these crazy abilities? Wait and find out when Thania and her cohorts arrive in Euna very soon!