Today we meet the new Holy hero who has seen the ravages of war and now straddles the line between Light and Dark... General Devroth. 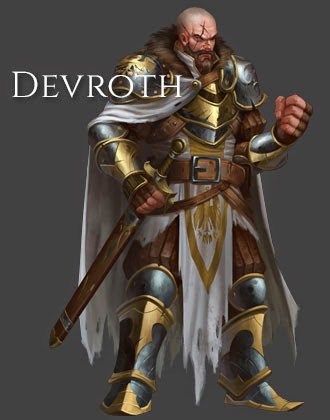 His description: "While war torn and battle weary, Devroth will never lay down his sword. He now recruits from all sides and rallies his young troops for battle, for nothing will stand in the way of victory."

Devroth is an aggressive hero built around using the smallest creatures in Kingdoms - those that cost 2 or less - and turning them into a lethal force. And his ultimate... let's just say that Devroth won't even let a Guardian of the Old Gods ruin his battle plan.

+1/+1 is extremely strong for a first ability, but it is balanced by the mana cost limit. The potential here is huge, from 2/2 Swiftshot Rangers, to 3/3 Dryad of the Watch. A great start to an effective ability set.

Ability 2: Enlist - Summon from your deck the next creature with mana cost 2 of less into target empty ally slot.

Tokens are for the weak. You brought an army... use it! Devroth can add a creature to the battle field for free with his second ability, and can place this creature where he pleases (useful for calling forth a recruited Firesworn Elf).

Much of the Kingdoms CCG meta is built around large creatures - GoOG, Realm Crusher, Skullcrusher Giant - all of which can give a small creature deck a serious headache. Devroth laughs at these monstrosities and yells "To the farmstead with you!"

Yes, every creature with a mana cost above Devroth's 2 or less will be sent away from the battlefield and replaced with a simple 1/1 Peasant (your creatures include).

This is an ability unprecedented in the game and even creatures such as Justice and Elara are not immune to Devroth's decree. If there is one new ability that will shake up the environment, this is it.

Come back tomorrow to meet our final new hero...

An update on the Watch List announce a few weeks ago. We have added two cards to the list and removed one.

Quickdraw Cannon: One of the most hated cards in the game for years, "QDC" has reared its ugly head again and the call for something to be done about it has been made. You can get into the discussion here: http://forum.kingdomsccg.com/?q=node/8266&page=1 The community has raised numerous fixes to the card and we are listening.

Likelihood of a change: HIGH

Gift of the Mystics: The fuel that makes QDC work. Gift of the Mystics is an odd card, particularly for a core set, in that its benefit is almost exclusively to combo decks. In QDC (or any future draw-based deck) GotM can save 5+ mana in a turn easily, giving a mana benefit much higher than even Relinquish which actually has a downside.

Likelihood of a change: MEDIUM

Fae Paragon: While Fae Paragon is definitely the strongest of the tribal "lords", he has not proven to have made an unbalancing impact in any format. We've seen some solid Fairy decks put up good results and that's what he was designed to help do. Fae Paragon is therefore no longer on the list.