For our final new hero preview, we bring you a dark and twisted hero whose very name oozes from the veins of the dead... Ichor. 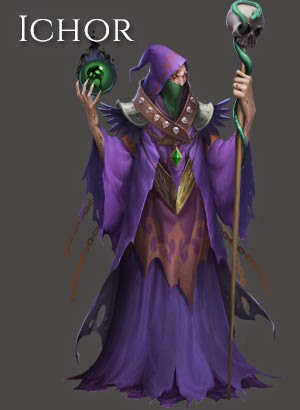 His description: "Obsessed to point of madness, Ichor will stop at nothing to twist the line between life and death. Wars can only be won if your enemy can be killed and with dark magic, death is only a minor annoyance."

The Undead Kingdoms has always excelled at returning the dead to the land of the living, but Ichor takes this to a whole new level.

A simple ability that gets to the corrupted heart of this new hero. Ichor aggressively puts cards into his own discard pile, then uses these cards for his evil machinations.

Ability 2: Wrath of the Dead: Your hero Mills 1. Target creature loses health equal to the mana cost of the milled card.

This is potentially the most powerful creature kill ability so far. Hit the right card and you can mow down creatures regardless of their size or abilities. Eternal Dragon or Eternal Protector in your way? As this is direct HP loss, those abilities don't come into play.

Now yes, you can hit your Rejuve Potion and hit for zero. Perhaps build with no Rejuves? He has gone mad, why not you? Note that cards like Rapid Prototype can now play double duty filling his charges and acting as a powerful flip for this ability.

Ability 3: Raise Minion: Put the top creature with mana cost of 7 or less from target Hero's discard pile into play in an empty ally slot.

And finally his ultimate. Pick a discard pile. Put the top creature into play. No corpse needed. No randomness. Yes, for balance we had to prevent Ichor from popping up Realm Crushers, but Bruisers from Beyond are a nice option to fall back on.

So there you have it - a powerful new Undead Hero to build around - a dark foil for the two new Light Alliance heroes.

When will you get your hands on these fun new options?