More About the (new) Core

Since the announcement of New Core, we've answered a number of questions that have come up on our Facebook page and official forums. Today we'll break down this Q&A so that everyone is up to date with the latest information.

1) When is New Core planned to be released?

We are aiming to have New Core available to everyone at the end of April. This is a large update so the only hitch could be getting through Apple's testing, but we've learned from our last submission and will try to get this update to Apple with time to spare.

2) What is the breakdown of New Core?

New Core is 229 cards made up of 4 Epics, 9 Rares, 9 Uncommons and 10 Commons for each Kingdom (including Unaligned) plus 5 Legendary cards (all Unaligned).

3) Will there be any balancing changes in New Core?

Yes, but only a few. We're looking at buffing three cards to help them out. We will not be nerfing any of the cards going into New Core.

This is a fair question. Kingdoms is a game of limits. 3 creature slots. 5 cards in hand. 1 rune word in play. 60 card maximum deck size. Yet not gear. This was clearly an oversight in design, and our goal is to make this right. Core clearly set out that Gear wasn't only for support. Two of the original gear - Quickdraw Cannon and Shadow Dagger - were intended to have the ability to win games when used in multiples.

Our goal is not to eliminate gear-focused decks from the environment. Epic Battle Axe has a place in the game, not just Archer's Parapet and Mage's Mantle.

8 is a number that allows players to build these decks, yet not let them get out of control. The cap also forces gear based decks to make decisions about which gear to play when. If you just throw out 8 gears quickly, you may not have any space for that key card, or only have room for 1 turret off that Deploy Cannons. This adds a layer of skill to the game that isn't there now, and will improve the game.

5) Will EVE/Rise/Tribes still be purchasable with the release of New Core?

Yes, just not in sealed packs. The only sealed packs available will be New Core, Light Ascending, Descent into Darkness and Gods Reborn. All cards will still be available in the Dynamic Market, even the bad ones.

6) Will the Advanced Tutorials give out packs of New Core?

7) Will the campaign rewards be changed?

Yes. All of the cards awarded during the campaign will be Standard playable. This includes the random cards available by the single-card prize packs.

8) Will there be any new cards in New Core?

No. They will all be existing cards.

9) Could the contents of New Core change in the future?

Yes! This is one of the benefits of running a digital collectable card game. We could add cards, replace cards, or remove cards without having to change the system.

We know that many of you will have a favourite card that won't make the cut into New Core. It's bound to happen. Just know that any card that has been removed could return to Standard in the future.

And how about we look at a few of the cards that ARE in New Core? Here are six of the Epic cards that made the cut: 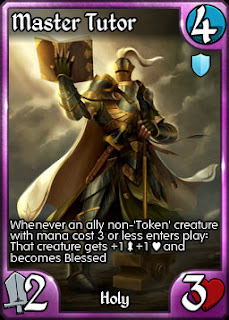 Master Tutor is one of the few Holy Epics that has seen tournament play on a regular basis. Able to turn smaller creatures into more significant threats, while keeping you alive with points of Blessed, Master Tutor could help see rise of Soldier decks in the new environment. 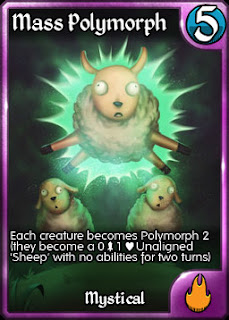 Mass Polymorph is often described as a solution to many of the game more difficult to remove creatures, and is a defining Mystical ability. For these reasons the sheep will continue to be a fixture in the new meta. 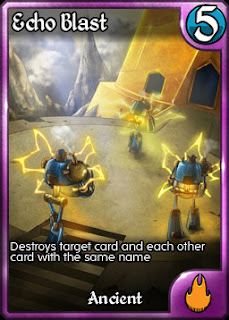 The best (albeit expensive) removal in the game, and a key reason to play an Ancient hero. Echo Blast is in! 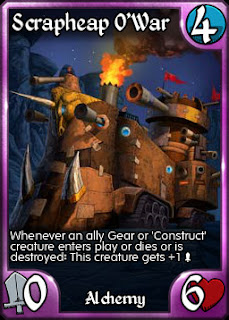 Released in Tribes, Scrapheap has never really had a chance to shine. It saw some play in MEK, but that was soon abandoned for the Shrapnel Cannon direction, because with no limit on gear and no way to block it, the Cannon was a faster win. With gear now restricted, the Scrapheap could easily move into gear decks as an alternate win condition and a great blocker. 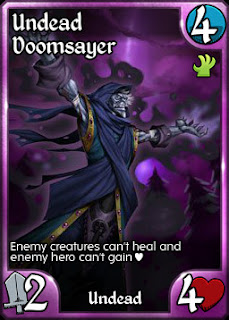 As the best current anti-life gain option in the game, the Doomsayer was a no-brainer to include in New Core. It's unique ability and decent stat line make Doomsayer a defining card in the Undead Kingdom. 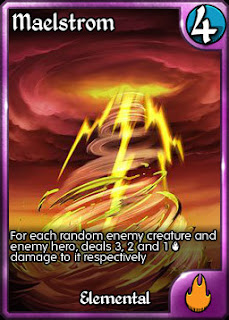 And finally, Maelstrom. One of the top Epics in the game, Maelstrom is the very definition of the Elemental kingdom - violent, chaotic, deadly. While not all of Elemental's direct damage suite has made the cut, their showcase spell lives to burn another day.

Stay tuned for more card reveals and a look at the three card buffs!
Posted by Unknown at 11:38