Today we're going to look at a number of the rare cards that will be a part of the new meta when New Core is released later this month.

As announced in our last blog post, there will be 9 rares in each of the seven Kingdoms, for 63 rares in the set. These cards have been pruned down from a list of 185 options, so basically we're removing 2/3's of the rares from the current environment to make a more streamlined and more easily accessible game.

Removing the dregs was relatively easy. There was no way that Nethergods Will had any chance of making it into New Core, and there were many cards like Goblin Strip Miner and Nature's Retribution that while not completely ineffective, didn't live up to the standard we were trying to build.

The more difficult decision was to pick which of the "tournament tier" cards would make it into the new set. New Core has also been planned as a chance to adjust the meta in a positive way, with the hope of expanding the range of cards that see play. To do this, some strategies needed to be strengthened, others needed to be weakened. 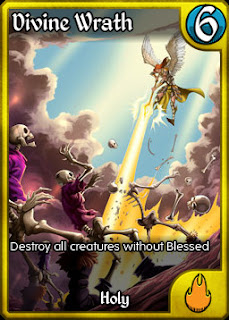 Holy's "Board Clear with a Bonus" is one of Holy's best and most unique spells. At its worst it resets the ground game when you fall behind, at its best it clears your opponent's board while leaving your Blessed or Indestructible creatures unscathed and ready to attack. Long considered one of the weakest Kingdoms, Holy stands to gain the most from the set rotation and this powerful spell may be the backbone of that resurgence. 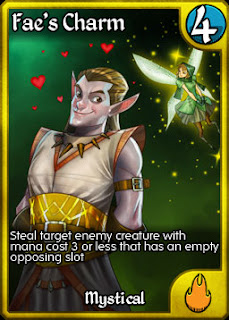 The original set card that helped define the Mystical kingdom, Fae's Charm will keep on stealing the hearts of enemy creatures in the upcoming meta. In a game where 2-3 mana cost creatures can have so much impact at all stages of a game, the Charm helps to keep these decks honest. Just killed my Scroll Maker with a Nightstalker and given it +2 Attack? Thank you, I'll take that. You're so kind. 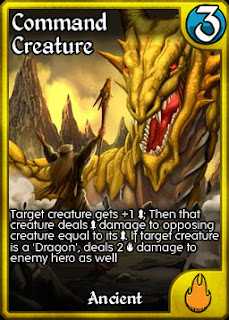 Command Creature is a surprisingly powerful spell that feels perfectly Ancient. Play it on any larger creature and it's opposing creature will crumple into a corpse while you rush across unimpeded. Add in the tribal bonus and the amazing artwork and Command Creature was a no brainer to add to the set. 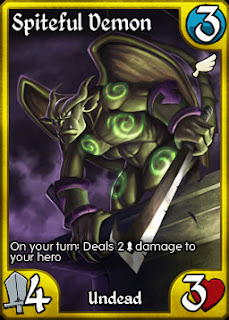 If Spiteful Demon didn't have it's On Turn penalty, it would be a 4-of in every deck, as every Kingdom would pair with Undead just to play it. While its penalty is steep, the card will likely form the cornerstone of future all-in aggro decks of all flavours (and yes, Undead got some very good spells as well). 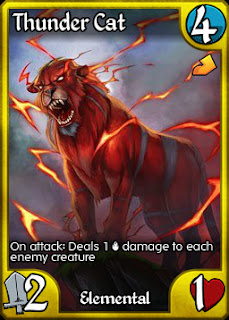 Board kill and face damage, all rolled into a nice, balanced package. In many ways a Fireball that can kill you if left unchecked, Thunder Cat provides great value in a simply designed card. Haste decks will be losing some of their cards, but Thunder Cat is too iconic to let go. 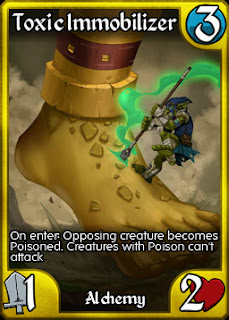 Hi Ravinova. When you stop making Chalice copies, perhaps you can lend a Goblin a hand a make a few more of me? Alchemy's role as the poison kings of Euna is being played up in New Core, and the poster child for this strategy is the Immobilizer. Combined with Alchemy Charm, our toxic friend can lock and inevitably remove all of your opponent's key creatures. Combine with Noran or the mystical spell Aether Walk to keep Toxic Immobilizer poisoning as your opponent tries to replace their fallen. 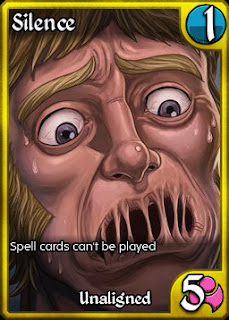 One of the best sideboard cards in the game, that has even seen main deck play in the arena, Silence will be in New Core to provide added protection against the many powerful spells remaining in the game.

And finally, as an added bonus, as the first revealed Legendary card that you will be able to find in the new set... 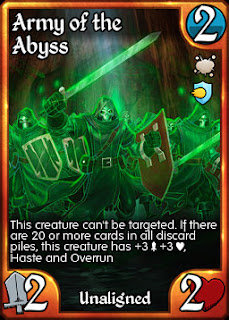 That's right. Army is in. Back when Dirty Fuel's "downside" was 99% upside, the Army found its way into every deck - whether it was combo, control or aggro. Rushing a 5/5 Overrun creature out of the blue closed out a large number of games. While weakened by Dirty Fuel's new card text, the Army remains a powerful late game threat, and hard to kill early drop if you need it.

Stay tuned for more reveals!
Posted by Unknown at 14:04