When trying to find the edge in tense creature battles, removal spells are the key to victory. Currently in Kingdoms CCG, the best removal is spread out across the expansions, making it sometimes hard to collect all of the key spells you need for all of your decks. With the creation of New Core, we are bringing many of these top spells into a single, one-stop-shopping option.

Today we're going to spotlight seven pieces of great removal that you'll find in New Core. We've already spoiled that Echo Blast and Maelstrom are in - so let's check out what else is in store! 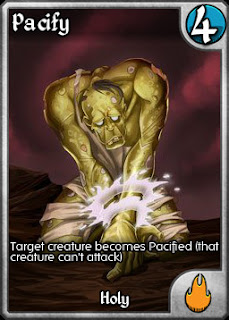 Much to the surprise of no one, Pacify is in New Core. It's one of the defining cards of Holy, and has proven to be both popular and balanced. A hallmark of stall strategies, the card is extremely powerful against expensive or buffed creatures, yet weak against smaller creatures. Add to that it is a great pick in both Sealed Deck and Draft and the card should continue to have an impact for years to come. 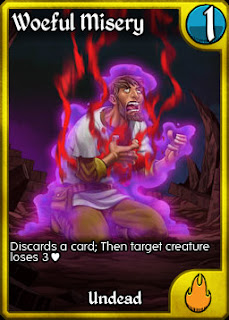 Let the misery reign! Woeful Misery is one of the best cards in Tribes for good reason. At just 1 mana and having the ability to ignore both resist and armor, Woeful Misery just kills creatures dead. yes, the loss of the extra card (chosen randomly) can hurt in some games, most of the time you just want to clear an opposing slot to win the game directly, at which point that lost card doesn't matter at all. 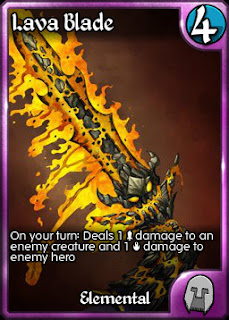 As we've already spoiled Elemental's premier removal spell, and Lightning Bolt isn't very exciting (yes it's in), here is removal and game-winning all rolled into one. One of the most popular gears due to its unrelenting damage Lava Blade is a perfect addition to the New Core roster. 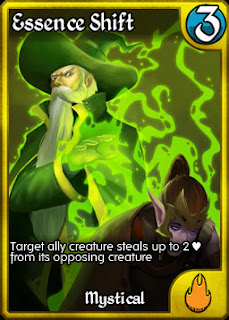 Mystical does not get direct damage, so it must find ways to subvert the opposing forces while progressing its board presence. Essence Shift does just that - it removes an opposing creature while making your creature more resilient in the process. Iconically Mystical, Essence Shift is in. 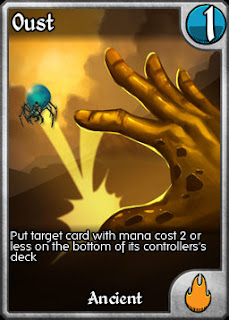 Small creatures (and gear) can be very annoying. Turn after turn they drop, while you try to collect your mana together.Oust just says "Go away". Rotted Remains pumped with 5 Reassemble? Go away. 4/5 Raging Vines? Go away. Oust is a great card to control a weenie based metagame and for that reason finds a home in New Core. 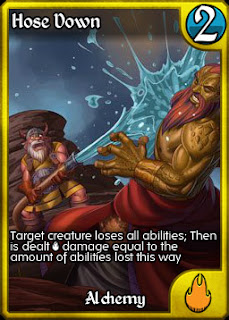 While Alchemy's removal spell might be situational, it is very good in those situations. No other rare card can take down Elara for a mere two mana, not to mention being able to efficiently deal with cards like Manacycle Wizard and... What's that? Ah yes, Hose Down is now 2 mana. This has been discussed many times, and with the release of New Core we're finally pulling the trigger. 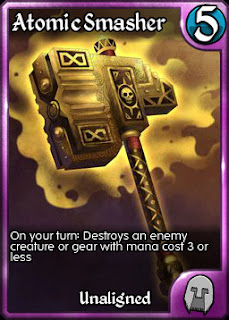 Unaligned doesn't get many spells, but they do get some very good gear. Like this one. While not currently a force in the meta, its power is undeniable and could easily find a place in the new Standard. Every turn just smash something small and run them over while they try to recover. Speak softly and carry a big hammer!

And as we spoiled one of the 5 Legendary cards in New Core last week, how about another... with a twist! 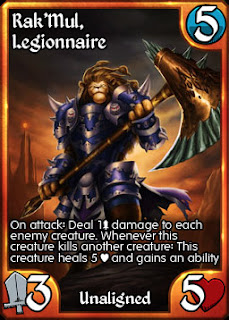 You asked for a buff. You get a buff. Rak'Mul has carried that axe for a long time, now let's see him use it! When attacking, Rak'Mul how deals 1 physical damage to each opposing creature. If that kills an opposing creature... his second ability triggers. Attack into a wall of 1/1s and he gains 3 abilities before hitting the opponent in the face! He can also now attack into a 4/4 and come out unscathed! Long due for a buff, we think that this new version is more than worthy of that orange frame!

Stay tuned for more spoilers and news!
Posted by Unknown at 11:23