Update on the Update

We are currently putting the final touches on the new release and wanted to give you an update as to some of the changes you will be seeing shortly.

While we've been revealing cards in New Core since the big announcement, the number one question we get asked is "How much will it cost?" In an early reply we stated that the price might go up, but we weren't sure by how much. We are finally ready to reveal the new pricing:

We didn't raise the price after all. The new Core Basic pack contains 10 cards with a guaranteed Rare or higher, and stays at just 5000 Gold. The Core Premium packs take a cue from what we've done with our recent packs and now have a chance to open up to 3 rares in a single pack, plus a better chance at getting an Epic or Legendary card than the Basic pack.

We previously announced that there would be three buffs happening with this release. Well we didn't stop there and we're now up to 9 buffs.

One of these buffs required us to attack the problem from a new direction. While some Kingdoms (like Elemental) are so chock full of good cards it was difficult to decide what was in or out, Holy was a particularly difficult Kingdom to build. Holy's commons from these four sets were so bad that we couldn't find the 10 we needed. We had to decide between the spells Regen and Armor, both of which aren't worth the 1 mana-and-a-card investment. So in the end we did this: 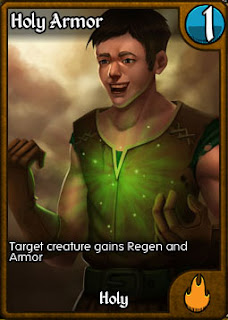 This is the only "new" card in Core, and it will replace all of the Regens in your current collection. No, it isn't going to have any impact in constructed, but you now have a card that is worth drafting or adding to your sealed deck.

After much consideration, we've decided not to change the name of Limited after all. Some players rightly pointed out that while the format does require a smaller card pool, it is just as competitive and cut-throat as Standard, so calling it Apprentice might suggest that only new players are involved.

The second change is much more significant. Legendary cards will no longer be allowed in Limited play. This has been a topic of discussion for months within the community, and as we're making such major changes to the game, we decided that it was time to make rule a reality.

This change will help new players ease into competitive play through the Limited format. There are still numerous "bombs" in Limited that will be able to swing a match, and it will remain highly competitive, but as those bombs will be in the Rare and Epic slots, they will be much easier to acquire.

The discussion on whether to include Tribes Two in the new Standard format or not was truly split. Many lamented that some good, key cards would be lost - like Deny - while others recognized that perhaps it was time to see the threat of Manacycle Wizards and Scavenging Goblins leave the environment.

We agree with both sides. Tribes Two will not be included in Standard, but we will be keeping those key cards in Standard.

We have decided to split Tribes Two in half. The Epics and Essences will remain in the Tribes Two mini-expansion, while the other two rares in each Kingdom will move to the new Premium (formerly Holiday) expansion.

The 14 cards now included in Premium (so stay in Standard/Limited):
This decision keeps some great cards in Standard without using up any of the slots in New Core.

The other question we've regularly heard since the New Core announcement is "what is happening with the crafting stones?"

Before we get into the details, we'll just show you this:

The new Elara's War stone will appear in both Light Ascending and Descent into Darkness premium packs, plus can be found through scrapping cards from these sets. The stone can craft any non-Legendary card in these sets.

Why start with this information? Because you'll also be able to find these cards with other stones. Here are all of the changes coming up:

It wouldn't be an update without another Legendary reveal so without further ado: 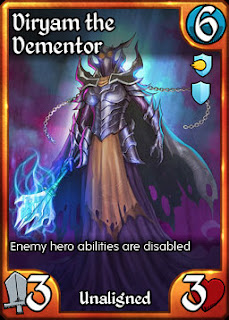