It's finally time to reveal what we've been working on since the start of the year. We have taken a hard look at Kingdoms CCG to see what's working and what's not. What will improve the experience? What will improve competitive play? What will make the game more inviting to new players? Like with the release of 2K sometimes you need to think outside the box to find success.

What is in store for Kingdoms CCG? Read on.

What is wrong with this Core Booster? 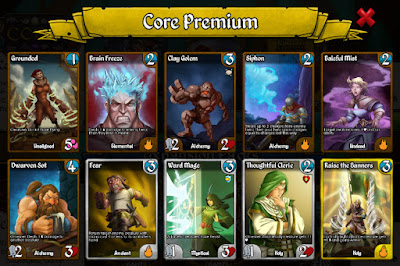 Answer: None of the cards are competitively playable. Okay, maybe Siphon in Limited, but that's it.

This isn't a "bad" core booster. It's a pretty regular one. Of the 164 cards in Core, less than 20 cards have seen play in either Limited or Standard in years.

This is a huge problem for new players. As Core packs are the cheapest to buy, new players are going to get a ton of these sub-standard cards, and will still have a difficult time building a good deck.

Some players have suggested lowering the cost of expansions like Eve and Rise to Core levels to help get new players the better cards they need. There are a number of problems with this idea:


This last point is important. Any change needs to make the game better from as many angles as possible.

There is also game balance to think about. We currently have over 1000 cards to choose from when building a deck. These cards were created and released over a four year period. Over that time we've learned a lot about what makes a card constructed playable, and now strive to make playable cards across all rarities, not just Rare and Epic. As a simple example, Clay Golem just wouldn't be a card any more. A three mana 2/2 would need a pretty significant upside - look at Frost Wielder or Ruthless Bloodsucker - or it would just be 2 mana, like Dunestorm Raider. A good Core Set should reflect this new reality. It should be a clear starting point for new players and should have a high percentage of cards that you wouldn't be embarrassed playing against a random opponent.

So without further ado, introducing...

Yes. We are redoing our Core set. The new Core set will include 229 cards from the original Core set, EVE, Rise and Tribes. Every card in Core has been hand picked to be a relevant, playable card. Kingdom synergies and abilities have been brought into focus, their play styles made clear.

When the new Core is released the older sets will be removed from the pack shop forever. The full set of cards will remain in the singles market for purchase, but will no longer be available through packs.

The question will be, of course, what happens to the cards from the old sets that aren't in the new Core?

As happens in the life of most CCGs, we have decided that it is time to reduce the number of cards in our Standard format.

With the release of new Core set, all cards from the original Core, EVE, Rise and Tribes that are NOT included in the new Core will be removed from Standard and Limited play. All Arsenal/Guild Wars cards and Promos will remain in the environment. Tribes Two is currently slated to stay in the environment, but this may change.

The benefit of this will be to reduce the number of cards from over 1000 to under 600.

Not only will this create an environment without Garden Gnomes, but also give our player base a break from cards like this: 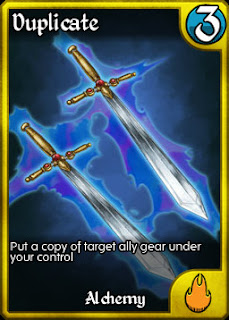 Players can debate whether or not a card like this is "broken" forever, but regardless of that discussion, Duplicate is a card that has allowed players to play 8 of a specific gear since the launch of the game. It has always been a concern when creating new Gear and has allowed numerous abusive situations. It's time to make powerful Gear to exist on their own accord (Dravkas not withstanding).

One of our goals for the environment is to encourage a more interactive game with more creature vs. creature tactics, where tribal and Kingdom synergies can truly shine. To do this, a few of the game's most omnipresent and/or degenerate cards will need to leave, but by doing so, they will open up space for new strategies to emerge.

Of course if you like making your 5th copy of Inverted Hourglass, all of the cards ever to have been made will continue to be playable in our Legacy format. We created Legacy last year with the release of the Two Kingdoms (2K) rule, but beyond allowing Guild Wars to remain in this format, we haven't really used it.

With the upcoming Rotation, Legacy will be truly supported Kingdoms CCG format.

To make room for Legacy in the Arena, and to clarify the differences between the formats, Limited will be officially renamed "Apprentice" and will replace the current, AI-only Beginner's arena. "Limited" is a term long used in CCGs to denote Sealed Deck/Draft play, so it has been confusing to new players.

Prizing will be available for all three arenas, but we will keep the best prizing for the Standard arena. It is "Standard" for a reason, and play there will be encouraged.

Getting a Grip on Gear

Finally, it is time to deal with one of the key issues with Kingdoms CCG once and for all. We are currently working on putting a hard cap on the number of gear that a player can have in play at one time.

It has never made sense that gear have no limit - not even when they no longer appear on screen - and creatures be limited to just three slots, but this has been one of the sacred cows of Kingdoms despite the many issues it has caused over the years. Now is our chance to fix it.

We are currently using a cap of 8 gear. This allows a deck to focus around 4 copies of two key gear, or one key gear and some support pieces. Like creatures, you will not be able to remove your gear without a card effect, but you can expect to see more card like "Recycle" in future sets.

Have Your Voice Heard

We expect that many of you will have a lot of opinions on what you've read today, and we want to hear them. In particular we'd love your input on the following:

Join the conversation on our official Facebook page. We will be regularly joining the discussion to address your questions, comments and concerns.