The second season of the PvP Arena is well under way and we're finally able to present to you the prize card that you've been playing all this time for.

We weren't sure if we were going to be able to get this in on time, but we've done so - the card will be added to the game on Monday. We've also finally gotten ahead of schedule on our Arena promos and will be presenting a peak at Season 3's card art at the end of this article.

Without further ado, I present Spellfire. 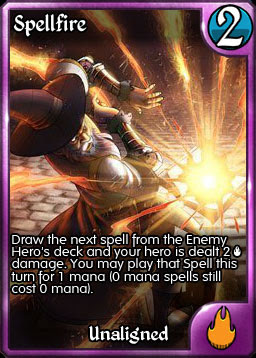 Like Summoner's Gambit, Spellfire offers the opportunity for a big reward; if you're willing to take the odd misfire here and there.

For 2 mana you're guaranteed to draw a spell card (assuming your opponent has any left in their deck) and that spell's mana cost will become 1 mana until the end of turn. Stealing spells isn't easy though, and your Hero will take 2 magical damage in the outing.

If you hit any big spell - Echo Blast comes to mind - you'll create a massive swing in the board state, and of course be removing that card from your opponent's deck. As most players only play the best possible spells, your odds of grabbing something useful is very high. Of course there's always the chance of getting a Duplicate when you're playing no Gear, but that's often a risk worth taking.

We look forward to hearing how Spellfire was used to grab victory out of the hands of defeat by using a Hero's powerful spells against them!

With Monday's release we're also taking the opportunity to make a couple of card changes and fix a couple of problematic bugs. 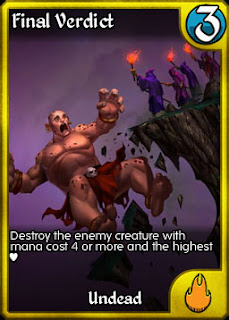 When I designed Final Verdict, it was intended to deal with two problem cards in the meta: GooG in Guild Wars and Justice, Demigod in Limited. As such, it needed to be able to deal with cards that were untargetable, and that couldn't normally be destroyed. After watching its impact since release, its clear that it has rendered the text "can't be destroyed" and the ability Indestructible moot, something that put the power level of the card too high.

With the new text, it is now the spell that is destroying the creature, so Indestructible will prevent its effect. As Justice was later dealt with directly, this small change to the card's function should open the environment back up to popular "big creatures" like Skybreaker Giant. 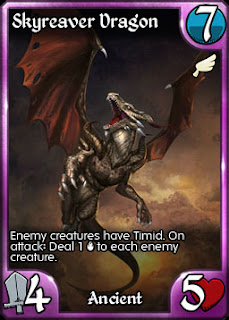 And talking about big creatures, Skyreaver Dragon, the biggest from Descent, has returned to its original design. During the beta there was concern that this creature was too powerful, and so it was raised to 8 mana, and given an extra point of HP. The team has since agreed that this wasn't necessary, so the changes have been undone and we hope to see the Dragon more in competitive play. While still a potential victim  of Final Verdict, the Dragon's powerful effects now warrant the risk.

Burn - The way this ability interacts with 0 atk creatures and those with Invoked has been fixed. Burn now only affects creatures that deal physical damage and that have done at least 1 point of damage.

Aggro Advanced Tutorial - The change to Arcanos in the last update broke this Tutorial as Arcanos would kill the Hellhound on the first turn, throwing the entire script off. This has been fixed and the tutorial can be completed properly.

Starting on June 13th, we will be bringing back the Tribes Two Limited Edition bundles for a very limited time. Each bundle grants one copy of each of the four Tribes Two cards from a specific kingdom and includes 50 Gems for the low price of $10 - including the golden LE Etched type. This is a great opportunity for new players to grab these popular cards.

Each Kingdom will only be available for 5 days, and all seven Kingdoms will be offered.

Here's your first look at the art for Season 3's promo: 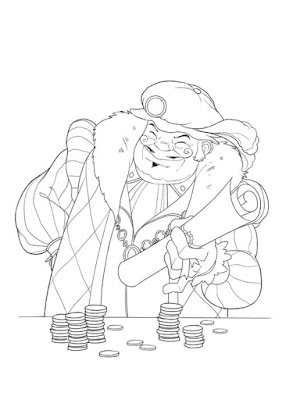 Can you guess what this card's text is?