Feel the Fury: Key Cards in Descent into Darkness

With the release of Descent into Darkness fast approaching, it's time to preview some of the cards that could have a major impact in the post-release meta.

For this set, it was important to me to design cards that interacted with the game in new and exciting ways, and created new design decisions for deck builders. Our first card exemplifies that idea perfectly: 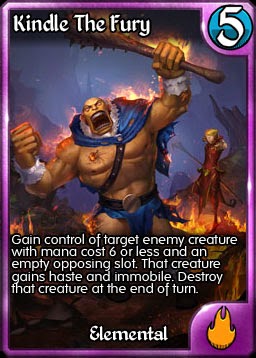 Gaining control of an opposing creature has so far only appeared on one card - Fae Charm - which remains a tournament and Guild War staple. The Elemental Kingdom isn't as subtle as Mystical though. They steal your creature, have it smash you in the face and then blow it up.

Where Kindle The Fury really shines is stealing creatures with "On Attack" and "When this deals damage" creatures, where you can immediately have that creature attack back, trigger their ability and then have that creature destroyed. Fire bolt on a Scavenging Goblin may be cheaper, but using Kindle the Fury is far more rewarding.

Note that have the creature destroyed on your side has added benefits. Steal a Maelstrom Phoenix, and not only will you be denying your opponent the chance to resurrect it, you will be able to resurrect it yourself on your next turn for additional damage. 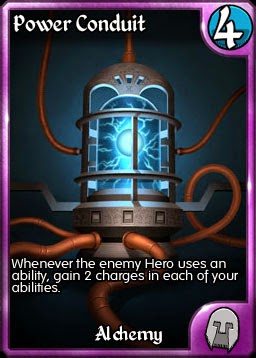 Arguably the most powerful card in the game that does nothing on its own. Originally designed with a mana cost of 3, this relic was debated long and hard amongst the Beta team. It was redesigned, retested, and then ended back with its original text but an added mana.

Power Conduit creates a difficult mental challenge for your opponent. Unlike Diryam, your opponent can use their abilities all they want. But if they do, you will gain up to SIX charges - an effect that can quickly get out of hand if not respected.

Of course a smart opponent does have options to playing around this powerful effect. If your charges are all one off full, giving you the extra charges is no different than just passing the turn. And there are times where using an ultimate or other powerful ability is just too critical to use, and triggering the conduit is a risk worth taking. But in the long run, forcing your opponent to play these mind games can give you a significant benefit in a hard fought game.

Note that from a timing perspective, the ability resolves first, so Ravinova and Bahamut can destroy the Conduit with their middle abilities and you will receive no charges. 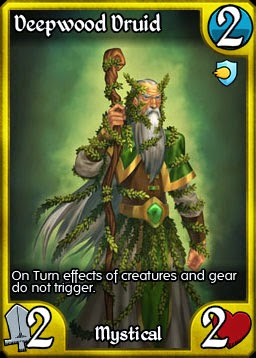 Yes, that says what you think it says. Any "On Your Turn", "On Enemy Turn" or "On Each Turn" effect simply will not trigger. Now this can be used to turn off opposing Lava Blades, or turn off the negative effects of your own Spiteful Demon or get all of the gain, and none of the pain, from Tainted Amulet.

And this never-before-seen ability comes of a solid little body - a 2/2 for 2 with a touch of Resist to keep him from being Disintegrated away.

Eye for an Eye 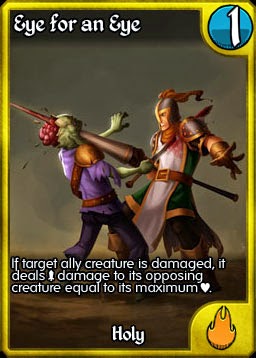 Finally we have Eye for an Eye, a personal favourite, that gives new life to those creatures with high HP. Again, Eye for an Eye does nothing on an empty board, but can make decisions for your opponent very difficult. Say that you and I have Dwarven Battle Rigs in a stand off. One tactic is to use a Disintegrate to knock your Rig down to a 2/2, so that if you attack, you'll lose your rig, while mine will still be on the board. With Eye to Eye in the game, this becomes a risky play. I can play Eye for an Eye and deal 4 damage back (my Rig's maximum HP) and attack through unopposed.

And damaged creatures can be used to kill any creature on the board simply by moving it over first. In a recent game on the Beta, I had a Drillspiker in play (a new 1/5 unblockable construct) that had been weakened and damaged down to a 0/2. My opponent, playing a Bahamut Fae deck, dropped a Fae Paragon and pumped it with Dragon Form, making a 4/4 Flying, Resist, Intimidating monster. With one mana and an Eye for an Eye, my damaged Drillspiker dealt 5 damage to the Paragon sending it crashing out of the sky.

So there you go with a few of the new effects found in Descent into Darkness. In our next blog post we'll finally reveal the new Legendary creature, a demon who will end more than a few games all by himself.