When designing Light Ascending, I had a simple idea: make a cycle of low mana spells that got better if you played them using a hero from the same Kingdom. I designed all six, but chose to put only three in LA and saved the others for Descent into Darkness.

To my delight, all three of the Light Ascending charms have found homes in competitive decks. Holy Charm has arguably been the strongest, giving Akatril and Belnir a much needed boost and made Justice-based decks a Limited-format wrecking ball.

Ancient Charm had a similar impact, sending Bahamut soaring, particularly in Limited. With Ancient  heroes locked out of the Rejuve Potion parade, Ancient Charm filled in that slot nicely.

Elemental Charm appeared in fewer decks, but as a 1 mana spell capable of taking out two small creatures in one shot, it remains a solid option.

We can now reveal the new Charms - three new commons that could have just as much impact as the rares in the new meta! 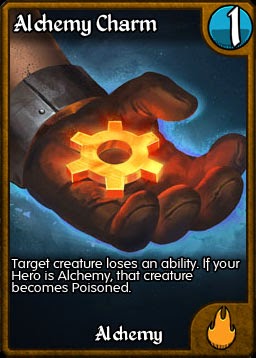 Masters of abilities and purveyors of poison, the Alchemy Kingdom's charm is a potent removal spell for creatures of all sizes. Does the opposing creature have Regen? Puresoul? This charm removes the ability first, then applies Poison to wear them down. While the death may not be immediate, its the only Charm that can take down a Skybreaker Giant. 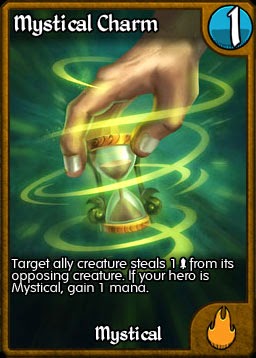 This charm was redesigned a few times, but the final design is definitely the best. Subtle in its ability, this may be the best Charm to be played by any Kingdom, as making a two point attack swing is a strong move for a single mana. Mystical heroes simply get the added benefit of getting that mana back for the result of a free targeted Dwindle. 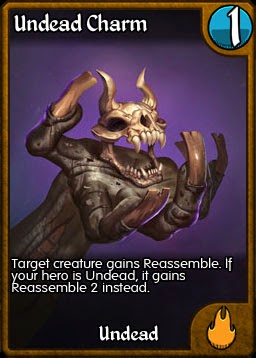 This spell was originally a simple targeted "creature loses 1 HP, your hero gains 1 HP". Our beta testers were not impressed and this design was suggested and tested in its place. The new design it very powerful, particularly in multiples. Hit with two on a sacrificial lamb and you have a 4/4 for 2 mana. Not to mention that Descent into Darkness also includes the best Reassemble creature ever released for you to feed the charms to. Perhaps Ardent Purifier will find a home after all.