Today we have released a number of fixes and adjustments based on community feedback.

All Paid Tournaments (those with a Ticket Entry cost) will now award Light Ascending packs as prizes.

** NOTE: There appears to be an issue currently with this. LA packs are being shown, but Tribes packs are being won. This didn't happen in testing and we will figure out what the issue is as soon as possible. **

For our many new players, we are currently working on a new special prize pack for tournaments that will include all of the cards from our first three expansions, Eve, Rise and Tribes. When ready, we'll add this to the tournament rotation. We're also reviewing the overall tournament schedule to make it more fun for new players, including reintroducing the Pauper and Kingdoms formats. We'll have more on this in a later update.

Tribes packs have been reduced in Gem price and are now available for Gold at a price of 20,000 per pack.

The prices of rare singles in Eve, Rise and Tribes have been reduced overall.

*Note: This won't appear until the next price update.

Note that yes, you can still achieve this using Belnir's 4 charge ability, but as this can't happen on turn 1 and takes effort to set up, we're leaving this as is. 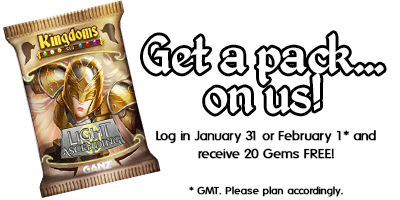 Yep! This weekend (GMT) just log into Kingdoms CCG and get 20 Gems Free! Just a special thank you to all of our players for enjoying this great game!
Posted by Unknown at 10:03