One plus One equals Boom

One Attack. One Health.

In Kingdoms CCG it takes a lot for a lowly 1/1 to get noticed. They can barely attack, and are rarely more than a speed bump. Yet surprisingly, the history of Kingdoms has seen a number of 1/1's reach tournament status:

Each of these creatures provide solid value despite their meagre stats. Fast damage, fast mana or creature removal - their impact is immediately felt.

Light Ascending carries on this tradition with two new creatures that will have players talking about and building around.

First, we have this little guy: 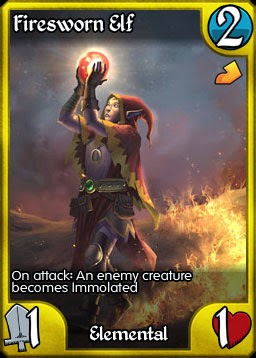 Seems pretty innocent right? Wait until you play against him.

Immolated hasn't really had its day in the sun, as it has so rarely been seen. Firesworn Elf will change that. For those who don't know, Immolated is a negative status effect that says at the beginning of your turn, you are dealt 1 magic damage for each point of Immolate on a creature you control. Yes, Immolate stacks, so if your creature has Immolate 3, you're taking 3 damage. Per turn.

Sending Firesworn Elf into a clear lane while the opponent has a creature on the board guarantees at least 2 points of damage. One for the attack, and one for the Immolate that he places on your creature.

A standard defence against haste creatures is to just move a bigger creature in front of them. Here Firesworn Elf really shines. He'll happily crash himself into a giant. Another Immolate point will appear and now the defender is taking 2 a turn from their own creatures.

Don't be surprised if you're soon targeting those Echo Blasts at your own creatures.

And if that is in the main course, here is dessert: 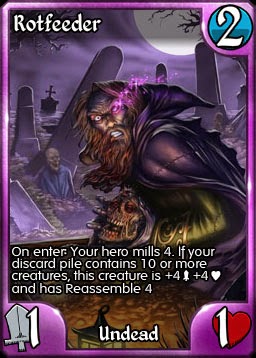 When the changes to Dirty Fuel were made, I said that the strategy of Self-Mill wasn't dead and mentioned that we had a card in waiting. Well here it is. Introducing Rotfeeder.

Rotfeeder has a huge upside. Played with a stocked discard pile, he becomes a 5/5 with Reassemble 4. That's up there with the Legendary Army of the Abyss.

And he is happy to help you fill that discard pile. Though unlike Army, Rotfeeder only looks at Creatures in your own discard pile. So the more spells like Frantic Search you include to speed his 5/5 state into play, the less likely that 10 cards alone will do it.

Even if you can't power him out in the first 3 turns, having a 5/5 for 2 mana in the late game is no slouch, and a great way to recover from a Divine Wrath or Realm Crusher.

Finally, he doesn't have to be hulking out to be of value. Fury Stoker and Raging Vines are happy to see cards in the discard pile at any time and Rotfeeder can make that happen.

Will these creatures reach the heights of tournament play? Only time will tell, but it is clear once against that smalls stats don't always mean small impact.

These are just two of the cards that will be appearing in Light Ascending. We'll continue to reveal more cards throughout this week and over the weekend, leading up to the set's release on... January 21st.