Here we are, at the final preview of our three new heroes. We've already met MEK, a powerful construct hero that uses gear and creature tokens to apply board control, and Felincia, a deadly cat warrior who can use your own creatures against you.

Today's hero is very direct. He doesn't get fancy with tokens or tricky effects. He smashes, and he does smashes well. 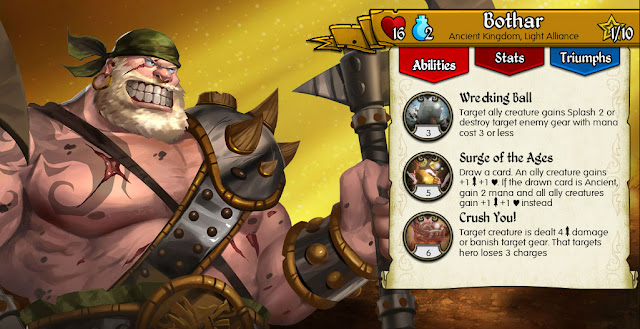 First off Bothar solidifies the Ancient Kingdom's role as the destroyer of Gear. Bothar has two such abilities, including the ability to banish frustrating gear once and for all (we're looking at you Inverted Hourglass).

Bothar's first ability, Wrecking Ball, provides early flexibility to control the board. Pesky gear like Concealed Dagger, Mourning Veil and Turret tokens can all be quickly removed, while the Splash can be combined with haste creatures to clear out low mana creatures.

His second ability, Surge of the Ages, is how Bothar prepares for the mid-game. Here he draws a card and pumps an ally creature. If that card is Ancient though, he pumps ALL ally creatures and gains 2 mana to crank out even more power.

Finally, we have Bothar's ultimate, Crush You! Bothar unleashes a mighty blow to take out a creature or banish a gear, sending its Hero reeling with the loss of 3 charges.

Crush You! may seem similar to Bahamut's Obliterate but they both have their strengths and weaknesses. Bahamut can take out a Skullcrusher Giant in one shot, Bothar will need help. On the other hand Bothar can punch T'rror and Iron Dragons right out of the sky, while Bahamut can't touch either.

So who will b your new champion? You won't have long to wait as these three heroes will be arriving in Kingdoms on Monday. **NOTE: Due to technical issues in our Pre-Live environment, we've had to delay this release.

Next Arena season players will be playing for this brand new promo card: 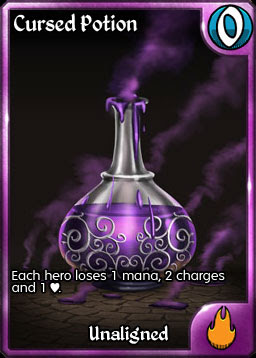 And all players who play their 20 games will get their hands on the previously revealed alt-art Relinquish. 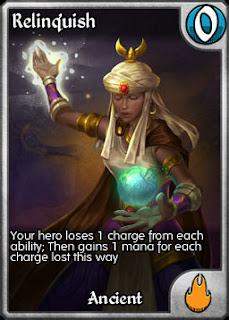