Tinkering Around with New Cards

Welcome to the first card preview from our first Season One pack. Over the next two weeks we will be revealing all of the cards from this new pack so stay tuned!

Today we're going to take a look at the cards of those crazy dwarf tinkerers of the Alchemy kingdom. Since the upheaval caused by R'Grom's arrival, the dwarfs, fearing that this new age of magic will render their machines obsolete, have looked to their Dark Alliance brothers for a new direction. Some dwarfs have followed the cat people into the desserts of Euna, seeking to plunder the wastelands. While others chase power through the bridging of engineering and the Undead's dark arts.

It is in this world that gives rise to our two preview cards. And let's face it, Alchemy was hit pretty hard with the loss of two extremely powerful (aka "format warping") cards from Standard:

Both of these cards accented Alchemy's mastery of Hero Charges. We knew that we wanted to bring some of this back to the Kingdom, so we looked at another Alchemy card that while good, rarely saw play in either Standard or Limited: 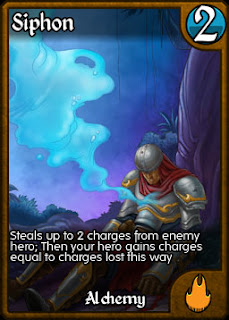 This original Core card was clearly the inspiration for the Scavenging Goblin, but was taken too far in getting from Common up to Epic. In Season One: Pack One we find a happy medium with this streamlined design: 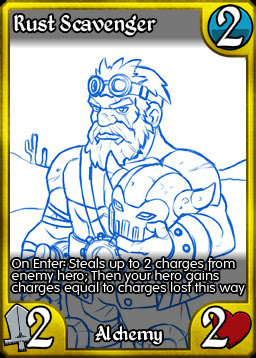 (Approved sketch art. Final Art is on its way)

Yep. This scrappy dwarf is Siphon-on-a-Bear, and is useful in all points in a game: holding off powerful ultimates while charging yours, acting as a quick blocker, or as a tinker target. Ravinova can copy him all day long for added advantage. Rust Scavenger is a simple design, but finally brings the great effect of Siphon to competitive play.

Next we have a completely new design that does something never before tried in Kingdoms CCG. It must be seen to be believed: 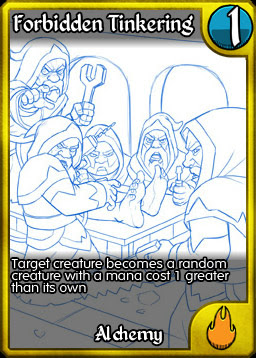 At first this card might seem like an inexpensive, yet limited version of Dravkas' Tinker ability, but in reality it works very differently.

First, the creature targeted becomes a random creature with a mana cost 1 greater. Not "from your deck" but randomly from all options in the game, including those not in the format or in the opposing Kingdom! Get really lucky and your 2 drop could become that Goblin Scavenger you miss so dearly (though it could just as likely become a Stench Ghoul). This gives the card the chance to really change the board when least expected.

Second, the creature "becomes" the new creature. This is new. Unlike Tinker and Swap no creature is destroyed or removed from play, and no creature is put into play. It simply becomes something new. From a game play perspective this means that On Enter and On Death effects do not occur, but the creature also doesn't gain summoning sickness either. That's right - if the targeted creature has already been in play for a turn, its new form can attack immediately. This makes it amazing with creatures with low stats but great On Enter effects, like this one:

Obviously no one like paying 3 mana for a 1/1, but the Assassin's effect is extremely powerful. With Forbidden Tinkering you can play the Assassin, kill the opposing creature, then if not removed, on your next turn play the spell and attack with the new found 4 drop. Get lucky and you're now attacking with a Dwarven Battle Rig or Libracider.

Finally, note that it doesn't say "target ally creature." That's right, you can tinker your opponent's creatures as well. Why would you do this? Say your opponent has just played Elara and you don't have the direct damage to kill her. Forbidden Tinker to the rescue! You has a 1 in 3 chance that Elara will become a Realm Crusher that missed its On Enter - an expensive 2/2, easily removed.

Forbidden Tinkering is a powerful card that brings both chaos and excitement to the table, and has the potential to become an Alchemy staple.

This Standard-legal deck packs a ton of utility creatures that can be run up Dravkas' own Tinker chain, or transformed with Forbidden Tinkering. Summoner's Gambit adds to the chaos, but really works here as hitting a four or five drop on turn 1, then using Forbidden Tinkering on Turn 2 to ramp up even more is quite the deal for 4 mana across two turns.

I used this deck to record some test battles against the A.I., including a battle against an Epic tier Legacy Guild Wars defence deck. Here are some highlights. Enjoy!