Following the cue of their Alchemy allies, the Undead Kingdom brings two very exciting new cards to the battlefield in Season One: Pack One.

The first card is this simple, yet powerful design: 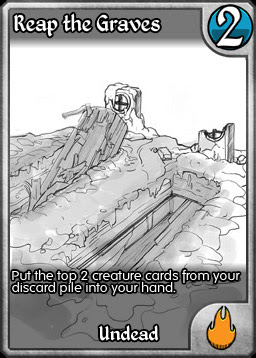 That's two cards, two mana, no drawbacks. Sure those creatures have to get into your discard pile in the first place, but the over the course of a game, that's going to happen quite often. Ichor takes the card to a different level, with his heavy self-mill strategy feeding Reap the Graves with targets in the early game.

In testing this card have proven surprisingly effective. Recurring sweet Reanimate creatures like this little lady can be very frustrating, as suddenly your opponent has way more copies than you have Disintegrates.

But my favorite target to recur over and over is a different dead lady:

With Corpsecraft on one kicking the other to the discard pile, you can create a fast and effective chain of cards that are difficult to deal with and a wrecking ball for your hand.

The second card for the Undead brings a new weapon in the war on life-gain to the table, following in the footsteps of Undead Doomsayer and The Rack, but with the potential for some truly new deck designs. 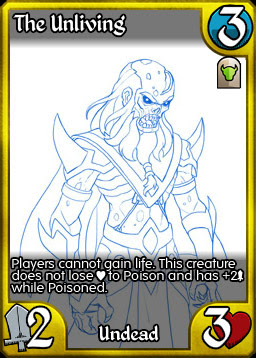 The first part of his ability we've seen before. Players cannot gain life. Simple, effective. It is the second part of the ability that is new and unique. The Unliving does not lose health to Poison. None. Even with Poison 1,000 he's just fine. And better yet, while Poisoned, he's a 4/3.

The most obvious combo is to pair The Unliving with Spilled Vial, which was conveniently moved to the Core set (Poison Bomb works as well).

The Unliving also works particularly well against Ravinova and her Blessed Chalices. Ravinova relies on her second ability to act as permanent removal for problematic creatures. She'll have no such luck here, as her poison will only enrage the Unliving and lead to a quicker death.