Reducing almost 700 cards down to 229 cards was no easy task. Each Kingdom had to considered separately and together. How well did the Kingdom's cards work together? How well did they play in Sealed deck? Where was their power in Constructed?

Beyond this there was the overall power level of Constructed to consider. If the goal was to create more strategic, interactive battles, what should the role of gear be? Removal? How powerful should combo decks be?

All of these questions led to some very difficult decisions that needed to be made. For every card added in, 2 had to leave, so the cards added had to result in an exciting, fun environment. Here is a look at a few of these decisions and the reasoning behind them. 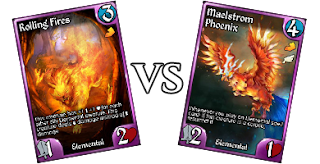 One of the goals in New Core was to tone down the aggressive, haste based builds. Haste is by far the most powerful creature ability, and as the number of creatures with Haste grew, the deck became more and more difficult to handle. Even with four anti-haste cards in the game, haste-based decks regularly won both Limited and Standard tournaments.

One of the best ways to beat haste is with a board of blockers. Sure they'll die, but at least the creature doesn't hit your face. Except Maelstrom Phoenix. Combining flying with haste, and throwing in the ability to resurrect for free, turned the Phoenix into a constantly repeatable source of damage that laughed off creature combat and most removal. It was time for Phoenix to go.

Rolling Fires on the other hand is a popular, powerful haster that has found its way into many top decks over the years. With Phoenix out, we suspect that it will quickly become the replacement of choice. 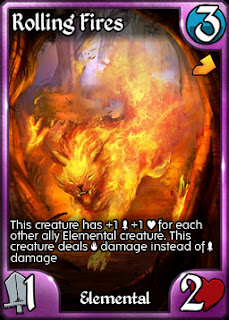 Firestorm Shaman vs. Lord of Flames 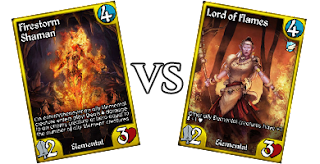 Staying with Elemental, which by far had the most "good" options to choose from, came this dilemma. Undead and Holy already had their "lords" in the set, so Lord of Flames was the obvious choice to include. Obvious, though a little boring.

The other "Four Mana 2/3 Rare" choice was the very powerful Firestorm Shaman. At points in KCCG's history Shaman decks dominated like few others. Those days have changed though. Now we have tougher creatures overall, significant options with Resist, and the core problem deck - Dravkas turning Manacycle Wizards into Shamans - is impossible to build outside of Legacy.

So we've put the Shaman into Core. Combined with the other changes to Elemental, we felt that she will remain a very powerful option, but be no stronger than other top rares. Let the Shaman brews begin! 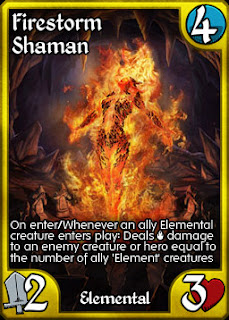 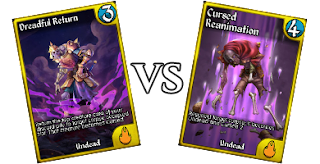 Reanimation is a core tenet of the Undead arsenal, and I knew that I wanted the effect as part of the new Core. The issue was which rare should it be? Dreadful Return still saw play since hitting 3 mana, but was solely used for cheating milled big creatures into play on the dead backs of little creatures (like turning rats into legendary demons). Cursed Reanimation was actually closer to what Undead is meant to achieve, but it was largely unplayed. In the end we decided that cheating mana costs was something that we were moving away from, so Cursed Reanimation was the choice, but we needed to make it better. The effect was fine, so a quick mana cost buff and we had our card. 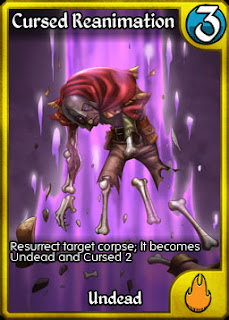 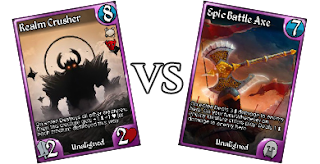 This was the most difficult decision of the whole set. Both of these cards are loved by those who play them, and hated by those who have to play opposed to it. Both are huge threats, but Realm Crusher isn't just a threat, he's also a solution.

In a CCG cards generally are either a threat, or a solution. Mindshocker is a threat. Disintegrate is a solution. Threats are more powerful overall than Solutions. That Mindshocker will win you the game if left unchecked. That Disintegrate does nothing until your opponent plays something to kill. Realm Crusher combines both of these attributes into a single card. It clears nearly any board state, and leaves behind a massive threat that isn't easy to deal with. Essentially, it does too much.

Additionally its place in the environment overrides every other mass kill card in the game. Why play Divine Wrath or Stone Barrage when for 2 or 3 more mana, you can have a 5/5 monster ready to attack back?

For these reasons, Epic Battle Axe was the final decision. Removing Realm Crusher takes pressure off creature based strategies, and EBA does best in those environments. 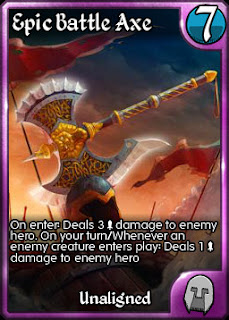 Vulgrath's Staff of Repression vs. Beckoning 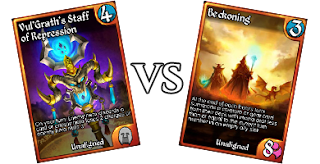 This was another tough decision. Beckoning started on the list, but as we refined our goals, it began to lose its luster.  Beckoning is the kind of card that is perfect for the top tiers of Guild play, but that has little value to players who are just starting out with their collections. As well, it is the very definition of cheating mana costs. It became clear that this was a perfect Legacy card.

On the other hand, Vul'Grath's Staff wasn't quite up to the level that we wanted in New Core. I have a soft spot for the card as it was the very first Legendary that I opened when I was a new player. Even then I realized that the card was a little underpowered, as it had no impact when it was first played. We've fixed this long standing issue by adding an "On Enter" to its effect. Now it's a Legendary worth a spot on the list. 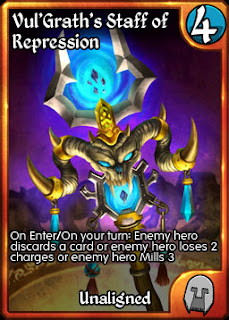 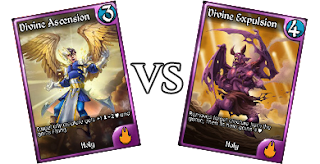 To be honest, this wasn't that difficult, but it was changed during development based on your feedback. Divine Ascension was the pick, as it is an iconic Kingdoms CCG card. I wasn't 100% happy with the pick though as since it was nerfed back in 2013, the card has rarely seen competitive play. When players started posting their picks for Holy Epics in the forums, one of the most consistent choices was Divine Expulsion. So I listened to the community and Ascension became Expulsion. 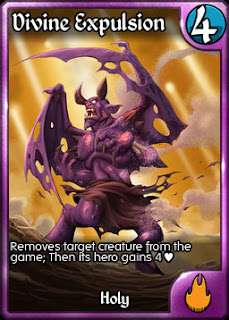 Rejuve Potion: In or Out 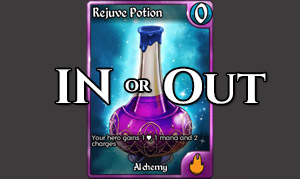 And finally, the card you're all wondering about. It doesn't need to compete with anything else, as it is in a league of its own. The "best card in Kingdoms" has long been a four of in any deck that could play it, and often pulled playing to Alchemy just so that they'd have access to its free, powerful effect. 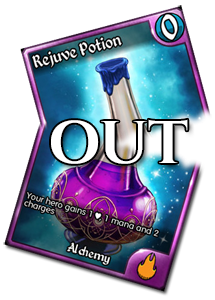 It's time to try a Standard that operates without this staple card. Rejuve will remain a powerful part of Legacy and Guild Wars though - a must have for anyone who plays in these formats. So much so that we've left it as the grand prize for defeating Nemesis once and for all. 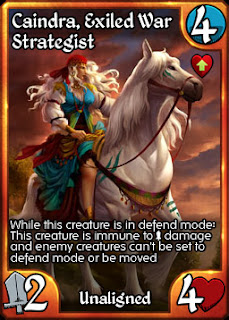 I doubt this will be a surprise to anyone. Since being buffed out of Lightning Bolt range, Caindra has seen play in both the Arena and in Tournament play. Just an incredible presence on the battlefield, Caindra can completely change the course of a battle. She makes for a powerful Legend that new players will be excited to open.

To recap, the five Legendary cards in Core are:
Stay tuned for the full card list reveal, coming shortly!