And here it is! We had been hoping to tell you that "we're live" at the same time, but issues with the iOS build have delayed our release. We will keep you posted with when the release will be.

In the meantime, the list you are all waiting to see. Introducing the full 229 cards that make up the new Core. We will be running numerous Sealed (now 6 packs) and Draft (now 4 packs) tournaments for both Core and New Age when the release it out.

At the end of the list we will show you FIVE additional card buffs included in this release. 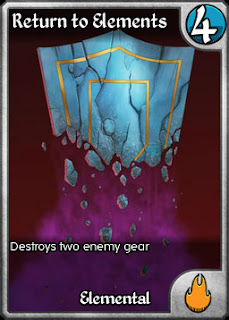 Over the last few sets we have been working to make gear removal more efficient. This mana buff makes Return to Elements more in line with our current costing, taking out two random gear for just 1 more mana than removing a gear of your choice. 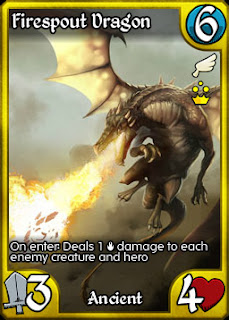 We knew we needed a rare Dragon to appear in Core as dragons are a key element of the Ancient Kingdom. Firespout is more exciting that Deathless, but the 3/3 stat line made it less than impressive in the modern environment. We've improved this by giving Firespout an extra point of health. 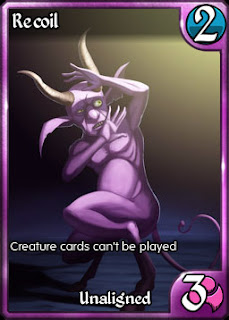 With our push for more creature interaction Recoil might be an odd choice, but the fact that it can be played both offensively and defensively in creature battles, and its role wasn't solely to fuel oppressive combo decks, Recoil was the clear choice. That said, it needed a boost, so its mana cost was reduced from 3 to 2. 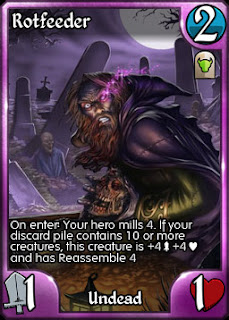 A minor, but important change. Rotfeeder has been given Corpsecraft. First off, it just makes sense (he's eating the dead in his picture) and second, by playing him on a corpse he immediately puts another creature into his discard pile getting you closer to that magic number 10. And last but not least, we've dropped the base cost of BoaNG to 2. We recognized that our previous nerf went too far, but knew that having a scaling cost was still the way to go. That one mana can make a big difference. Paying 9 mana for a 7/7 with 7 abilities is really good. And you might now... you know... want to play with some Scroll Makers in your Birth deck.
Posted by Unknown at 13:21