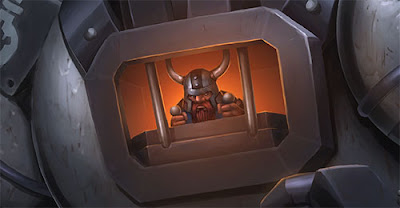 Today's update fixes a number of bugs that were brought up in the forums, and deals with some cards that were considered "overly weak" from the Gods Reborn set.

After the release of Gods Reborn, we heard you loud and clear that you weren't happy with some of the Epic rarity cards in the set. Epic cards are supposed to be exciting. They might not always be at the top of the constructed charts, but they should all be cards that you think "I could build around that" or "That would be fun to play." Two cards in particular were singled out - Aether Walk and Mek Unit. We have decided to buff these cards. 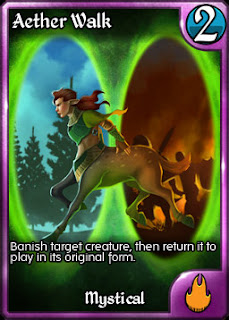 Aether Walk now "blinks" any creature in the game for 2 mana. As the person who set its original cost and limitation, I was perhaps a little too concerned about the interactions with Realm Crusher, Archmage and T'rror. So here you go - a constructed level card that can blink some of the most powerful effects in the game. 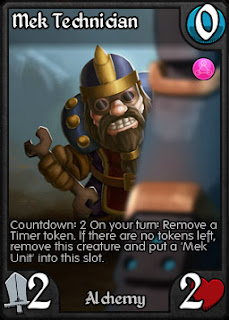 Mek Unit was called a "bad Gob Hog" and I think that this was a fair assessment. We've taken that idea to heart and made Mek Unit a "slowly resurrecting" creature that ignores the discard pile and is a ton of fun to play. First off, Mek Unit is now just 4 mana. This is strong for a 3/3 with 2 abilities, but not out of line as it is an Epic and neither ability provides evasion. The larger change is that he now drops this guy - the Mek Technician. The Mek Tech will work for two turns rebuilding the Mek Unit. If not stopped, the Unit will replace him and be ready for battle (note: this replacement does not trigger Recycle as the Tech didn't die). 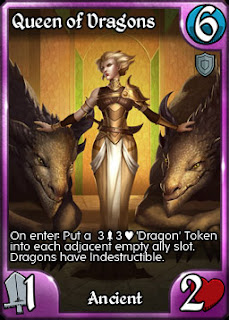 Finally, we've given Queen of Dragons Indestructible. The whole idea of this card was that until you killed her, the Dragons couldn't be destroyed. The problem is that the way the game works, cards are not destroyed all at the same time - they are destroyed in sequence. So a Realm Crusher would fail to destroy the top dragon, destroy the Queen which would immediately remove Indestructible from the bottom Dragon, then destroy the bottom Dragon. Now the card works as intended when dealing with mass destruction. Just remember to Smack, Whack or Bolt the queen first before blowing up her Dragons.
Posted by Unknown at 10:25