Get Ready for a New Age

In the past year we've seen 207 new cards added to Kingdoms, many of which that have seen huge amounts of play in constructed. Yet there have been numerous cards in these sets, the commons in particular, that haven't had a chance to really shine. Many would be sealed deck all-stars, but there hasn't been a sealed format that includes these cards. 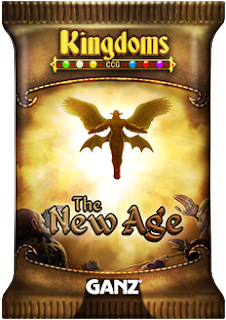 Starting with tomorrow's release, you will have a new Sealed format to enjoy: The New Age. These event-only packs each include 10 cards from all three of the new sets. So you can open a Mek Unit beside a Shrieker beside a Scroll Maker.

New Age Sealed uses 6 packs instead of 8, as the quality of the cards included are significantly higher than previous formats. This still gives you 60 cards in which to find your 25. In our internal testing, we often had 30+ cards that we wanted to play, and struggled to whittle our decks down to optimal size.

Card evaluation is surprisingly tricky in New Age sealed. Top cards like Scroll Maker and Fae Paragon aren't as strong when you can't support them with the right cards, while the rarely played Whack becomes a key piece of removal. The Charms in particular will be question marks for your deck as you will always be Unaligned.

Here is an example sealed deck from our testing: 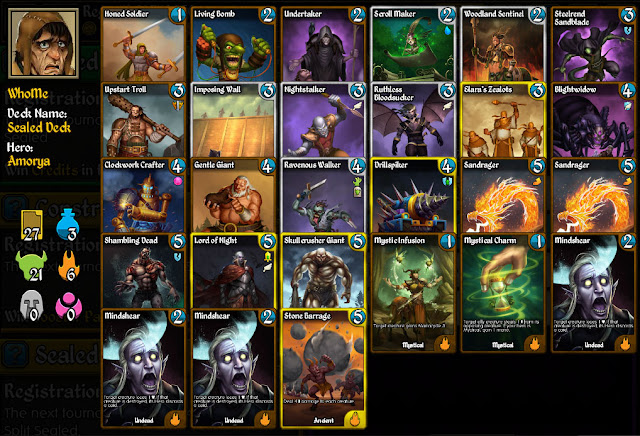 The deck starts out with three must-play rares: Lord of Night, Skullcrusher Giant and Stone Barrage. These three cards alone makes this deck a top contender. The deck is low on a direct removal, with just the three Mindshears (no Whack, Vampire's Kiss or Flame Barrage to be found), but adds Nightstalker, Elara's Zealots and three haste creatures to help clear problematic opposing creatures. Imposing Wall and Drillspiker also create problems for the enemy Hero. Also note the Steelrend Sandblade, Upstart Troll and Gentle Giant. These commons, while simple in design, sport very efficient stats and could be key cards for this new format.

Even here we only went down to 27 cards. Which two cards to remove? We leave that up to you. Join the discussion about New Age in our official forums.

New Age Sealed will be first appearing in our free-to-enter event slot only, with 12 events scheduled each day. We will be expanding the format to our ticket event slots in an upcoming release.
Posted by Unknown at 11:29