We've been working away at programming and testing the new cards in Light Ascending and the set is coming along nicely. As it's SO hard to keep these cards under wraps, we've got our first preview card today!

But first, we're also looking at ways to improve the game as a whole. One of the areas that we have singled out as needing improvement is Crafting.

Note: if you we're planning on scrapping a Rare card for essence... don't.

Today, if you scrap a Rare there is a chance that you will only get a Crafting Stone, and as you need way more essence than stones, that's just terrible.

With our next release we are eliminating the chance to only get a stone when scrapping. You will still be able to get a stone with your Uncommons and Rares, but you'll always get essence as well.

We're currently testing some other changes to crafting as well, but we'll tell you more about that in the new year.

In every new set, we look for those never-before seen abilities that have the potential to turn the game on its head. For our first preview card we have an amazing new Relic with card text that dramatically changes the battlefield when it is your turn. 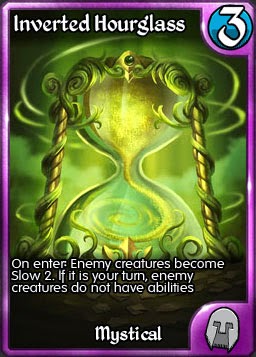 "Enemy creatures do not have abilities" No Resist. No Armor. No Manacycle. No Reassemble... Combat on your turn will be completely different with the Hourglass in play.

And the On enter trigger cannot be overlooked either. It holds back an aggressive team for two turns as you set up the perfect response.

Expect the game to get turned upside down when the Inverted Hourglass arrives in January!

* Card is currently in testing and is still subject to change.